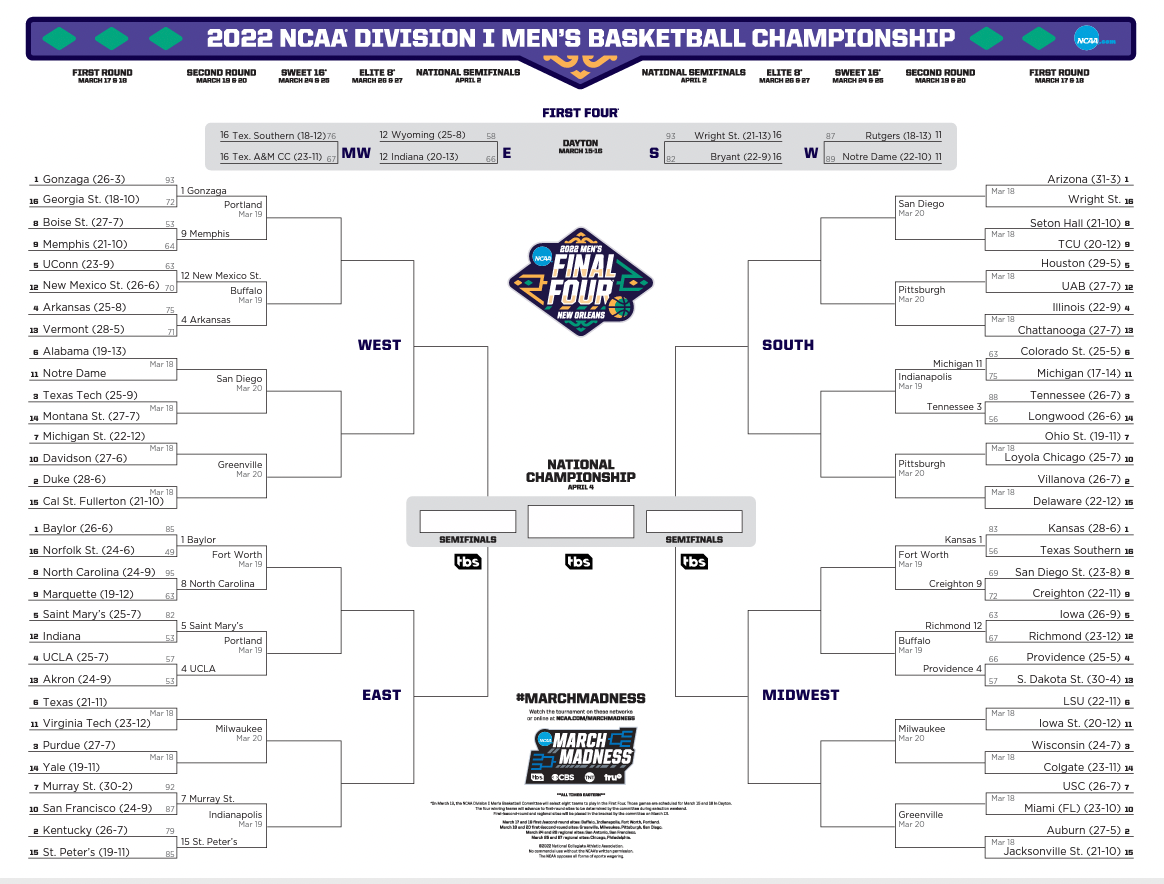 The Road To March Madness With VertiMax Basketball Training Everyone knows basketball success depends on many factors, but these famous quotes sum up the attitude and training teams and players need for a shot at winning.

Your Training Starts With VertiMax

Basketball is a shooting sport. With the competition, you could do a lot worse than betting that a great shooting team will outperform a mediocre shooting team.

The NCAA’s Division I men’s basketball tournament gets into full swing with the round of 64 on March 17 and 18. Then the next round of 32 will take place over the weekend. The tournament continues until the Final Four begins on April 2 in New Orleans. Check out the bracket and follow along to see who wins the national title.

VertiMax basketball training equipment delivers results of speed, vertical jump and explosive power for teams and players. Not only do over 50% of pro teams use VertiMax, but over 70% of Division I colleges and thousands of high schools and families using our performance training equipment for all sports. Watch these videos to learn how VertiMax can speed up your road to March Madness by enhancing your basketball performance on the court. Defenders must learn how to "close-out" properly against the player who just received the ball. The defender should begin the close-out after they pass the ball. While the ball is still in the air, the defender sprints toward the ball-handler in a low stance.

As you approach the player, the defender should have the inside hand high, in order to contest an outside shot or a high pass to the post. The outside hand is low, and in a position to "dig" at the ball, or deflect a bounce-pass into the low post. The goal is to contest the shot, while still being able to stop that first step of the dribble-drive.

Your baseline line foot should be back in order to force the ball-handler toward the baseline. The first few steps are quick and explosive, while the last several steps should be quick, choppy steps to stop your momentum and don't allow them to dribble around you. A big part of a team’s man-to-man defense is the need to keep offensive players away from the paint, anything inside the painted lines of the 3-point zone. VertiMax improves defensive transitions with boxing out, transition play, rebounding, fast breaks, and conditioning to keep the offense out of the paint.

The coach must run the training at game speed and supervise the Paint Drill closely. The coach will toss the ball up into the air. Athlete will explode up to the ball. Secure the ball with two hands. Focus on landing in an athletic stance with a wide base on two feet. This specific rebound basketball drill works on ripping the ball through on the catch or out of the triple threat. Rip through and bring the ball from hip to hip, to keep it from being exposed to a defender.

Stay low in the stance and don't travel the ball. The VertiMax Core Vest provides 18 attachment points for the user to connect to in order to apply a plethora of innovative loading options that will deliver unique strength and power gains to elevate this jump squat drill.

Stand tall with your feet at shoulder-width distance. Keep your chest up as you bend at the knees and sit back as if you’re about to sit in a chair. Once your thighs reach parallel, push through your heels in an explosive jump straight up in the air. Land softly and immediately go into your next jump squat. The Lateral Shuffle is a popular agility drill used by athletes at all levels to improve multi-directional speed and movement. Shuffling happens frequently on the court, even if only briefly as a transition between movements.

As you do a lateral shuffle, you're going to hinge slightly over from your hip flexors while bending your knees in an athletic ready position. As you travel sideways, you are going to use your legs.

The VertiMax V8 and v8 EX platforms are the most complete and diverse training tool available today. A VertiMax platform can radically improve a player’s vertical jump, speed, and agility with or without a ball and help them develop a level of explosiveness that will transfer directly to the court. When the VertiMax Platform is a key ingredient in a player’s training, not only can they reach their true potential, their potential can actually increase. This is because every basketball skill improves with the VertiMax platform to levels once thought unattainable.

Up to 5 athletes can even use the VertiMax Platform at a time, making it the perfect piece of training equipment for group training!

The VertiMax Raptor is unlike any other piece of athletic training equipment. It is truly in a category by itself. The VertiMax Raptor enhances performance in the horizontal plane and lateral directional movements, and the equipment is completely mobile to use inside on the court, in a gym or outside on a field.

It’s affordable, simple, and the most effective product to develop a basketball player’s speed, change of direction, and ball-handling skills.

What makes these VertiMax products even more unique and effective for basketball training is the resistance cords which attach to the limbs of the body. Doing so allows players to perform every single exercise with free use of their hands. This means that whether they’re jumping, skipping, or sprinting; athletes can easily add dribbling, shooting, passing and any other ball skill to the drill.

Better yet, research and science on VertiMax have shown that VertiMax can increase the performance of basketball players in both the off-season AND in-season!  This makes VertiMax the perfect piece of basketball training equipment for year-round training!