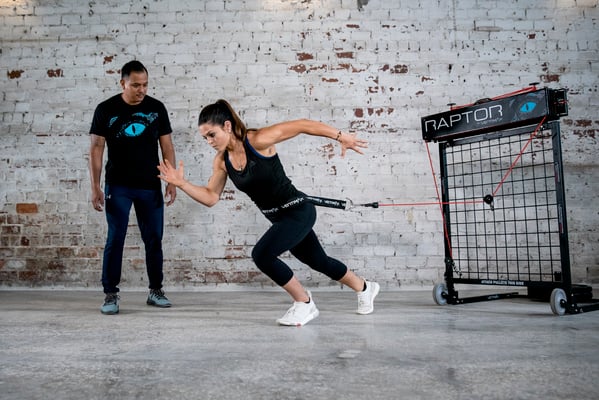 What is Vertimax Raptor Fit?

The VertiMax Raptor Fit system allows athletes and fitness enthusiasts to train in the horizontal plane over short, medium, and long distances.  With an extra-long band and a patented pulley system, the smooth resistance remains consistent, without any rapid increases.  This means athletes can cover long distances in any direction and also at any speed!

VertiMax Raptors enable clients to experience unique training programs that can improve speed, strength, and power, while also working on functional movement, mobility, and stability. The best part about using the VertiMax band technology and eliminating inertia, is the ability to apply maximum effort without having to use maximum loads. The results are extraordinary.

VertiMax Raptor is a portable resistance training system which can be used inside or outside, and can be mounted in many ways outside on the field or inside a gym. Weighing only 14 pounds, the mobile VertiMax Raptor is great for personal training, small group training, and sports performance training. Both Raptor and Raptor EX models are lightweight and designed to be portable with multiple attachment options.  You can attach the units to chain link fences, walls, and portable support systems.

The Raptor has two 43 foot bands inside the unit, while the Raptor EX has a single 86 foot band inside the unit. Since the Dual Raptor has two bands, you can load an athlete at two independent locations on their body or train two athletes simultaneously by attaching one band to each person. The Raptor EX band (86 ft.) is twice as long as the Raptor’s bands (43 ft.). The increased training range makes the Raptor EX a more efficient choice for athletes such as sprinters, who are often interested in improving top end speed and need to run farther with a load to achieve higher resisted training velocities. If you want to load an athlete during open field drills, typically a Raptor EX is a better choice due to the extended loading range it offers. However, it is important to note that the Raptor EX having only one band can only train a single athlete at a time vs the Raptor which can provide multi-point loading or the ability to train two athletes at a time. 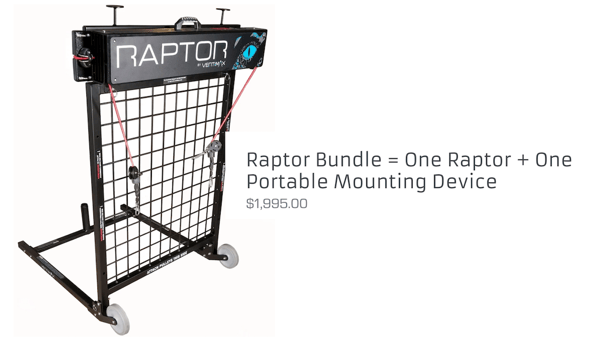 This bundle includes one Raptor Dual OR one Raptor EX plus our portable Raptor Mounting Device.

VertiMax Raptor Dual unit has two cords with a training range of 0-20 yards each.

VertiMax Raptor EX unit has all the capabilities of the VertiMax Raptor Dual but with the off-platform training of approximately 45 yards with one band only.

With completion of the VertiMax Training Certification Course, pre-approved credits through the American Council of Exercise will be distributed. ACE is a universal leader in Personal Trainer Certifications, as well as Group Fitness and Health Coach Certifications.

During the course of the Certification, you will be given the opportunity to demonstrate what you have learned to get the most out of the training certification experience.

Our goal is that upon completion of the Certification Course, you will gain product knowledge, coaching knowledge and skills to effectively and safely utilize Raptor Fit while training clients in universal training.

RaptorFit by VertiMax offers personal and group fitness training solutions by providing programming, app advantages and business development support to help you utilize the equipment to best service your clients and business.