VertiMax’s ability to maximize vertical leap performance, which is a measure of explosive leg power, will transfer to significant gains in other critical sports performance parameters such as first step quickness and overall speed. Athletes jump higher and farther when they train with VertiMax Athletic Performance Equipment like the V-Series Platforms and Portable Raptors. 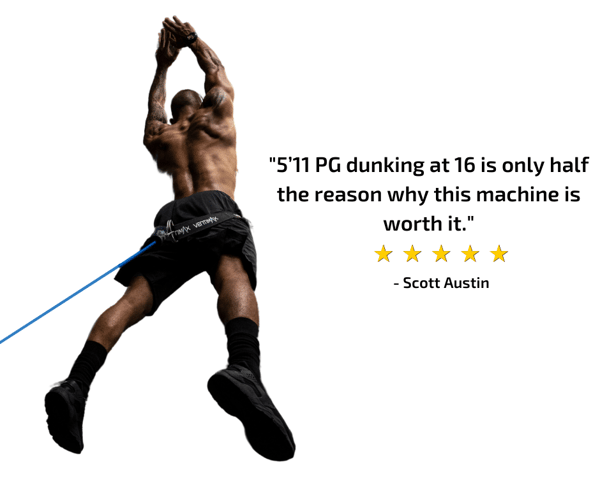 Exerting maximal force in minimal time is having explosive strength and being explosive is essential in just about every sport. It’s been proven that displaying high levels of explosive power is believed to be one of the most important factors in determining athletic success according to Jeffrey McBride, Travis Tripleett-McBride Allan Davie and Robert Newton in their research studying powerlifters, Olympic lifters and sprinters.

Training exercises to improve vertical jump are plyometrics consisting of quick, explosive movements designed to increase speed and power. Jump training drills maximize muscle contraction by strengthening the fast-twitch muscle fibers that convert strength into speed. When an athlete can increase the strength of the tendons they not only help with reducing injury but also can be more explosive.

Watch the Linear and Lateral speed training videos below to learn how to run faster using the Vertimax speed training system and methodology that is light years ahead of the competition. You can also learn more about the power of VertiMax technology and what makes it work so well here.

How to Jump Higher with VertiMax

Learning how to jump higher with VertiMax trains not only your legs, but also another major element of the movement - arm swing. Research found 13 percent of vertical jumping capabilities come from arm swing speed. But what piece of equipment could teach that and lower extremity power? The VertiMax. With resistance bands for your hips, legs and arms, See the article on How to Jump Higher. 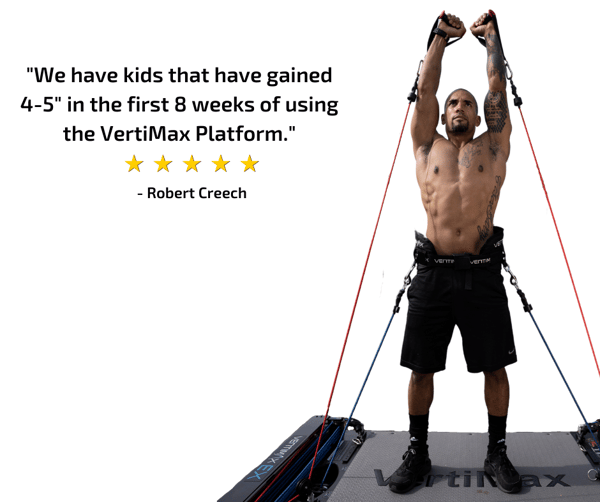 Who can use VertiMax for Vertical Jump Training

All sports can benefit from vertical  jump training. Training exercises to increase vertical jumping include plyometrics consisting of quick, explosive movements designed to increase speed and power.  Drills on how to jump higher maximize muscle contraction by strengthening the fast-twitch muscle fibers that convert strength into speed.  When an athlete can increase the strength of the tendons they not only help with reducing injury but also can be more explosive.

VertiMax can be used to increase an athlete's vertical jump for basketball, jump higher in volleyball, run faster in track, jump up to block a pass in football, be the first to receive a header in soccer, dunk or rebound a shot in basketball, and be a more explosive athlete in any sport.

See how Bryon Jones  Broad Jump Record Video used VertiMax to become a record breaking track and field athlete  Jones set a world broad jump record with 12-feet, 3 inches and he also pulled off a fairly shocking 44.5-inch vertical jump.  The jump was one of the best ever by a corner at the combine and a mere half inch off the world record in that discipline as well! 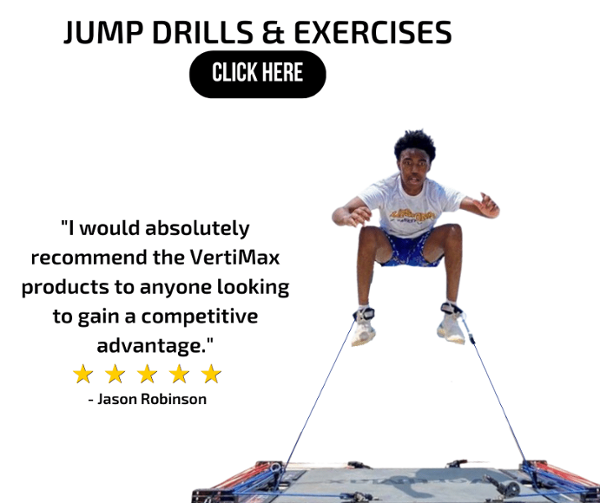 Why Vertimax for Vertical Jump Training

VertiMax is the only system that can load both the arms and legs at the beginning of a vertical jump movement from the initial start of the jump with consistent resistance throughout the entire range of movement. The VertiMax design will not allow elastic bands to go slack because they fully retract into the platform surface. With VertiMax bands attached to the waist and pulling downward on the athlete, no matter how low the athlete squats, the bands will not go slack because the patented pulley system allows the bands to fully retract into the platform surface and slack cannot form in the band. With VertiMax, all the muscles associated with the vertical jump effort will be loaded through the Full Range of the vertical jumping motion. Applying a useful training load through the FULL Range of Motion will more effectively condition the leg, back and shoulder muscles involved with the arm swing to produce power sooner in the explosive movement to improve acceleration and take-off velocity. 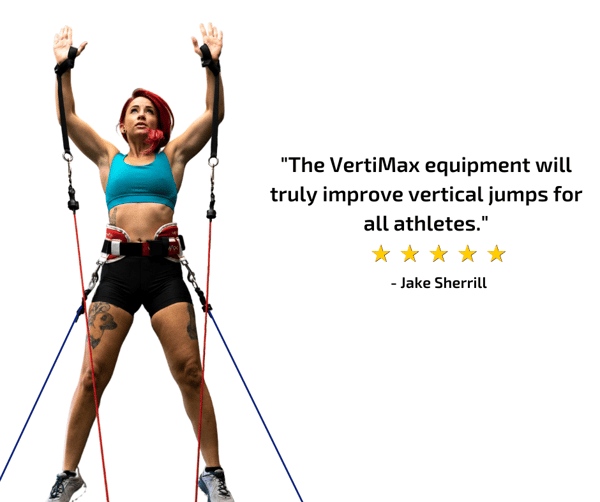 What Does the Science Say About VertiMax Vertical Jump Training

There are many vertical jump research studies using VertiMax.  The research positively demonstrates effective improvement of lower body power using VertiMax resistance jump training equipment versus traditional plyometrics program when combined with traditional strength and conditioning approaches. Superior performance enhancement and injury reduction may be expected with the incorporation of VertiMax over alternative jump training as well. The functional benefits result from the versatility of movement that VertiMax permits and the unique capacity to exaggerate jump landing/movement deceleration as well as the unrestricted ability to progressively overload the training stimulus.

Training exercises to increase vertical jump include plyometrics consisting of quick, explosive movements designed to increase speed and power.  Drills on how to jump higher maximize muscle contraction by strengthening the fast-twitch muscle fibers that convert strength into speed.