Track is one of the purest sports; a test of how far and how fast the human body can go. That doesn’t mean, however, that track athletes can expect to perform to their best ability without relying on off-track training. In fact, world-renowned track champions attest to the fact that strength training is a key to success in track just as it is in any other sport.

Track and field can easily be thought of as the most natural and functional sports there is. This is because it simply tests human performance abilities across a range of biomechanical movements. VertiMax is clearly the best running tool on the market, so this article will focus on the other track and field events that include jumping and throwing. VertiMax can be used to improve performance with: 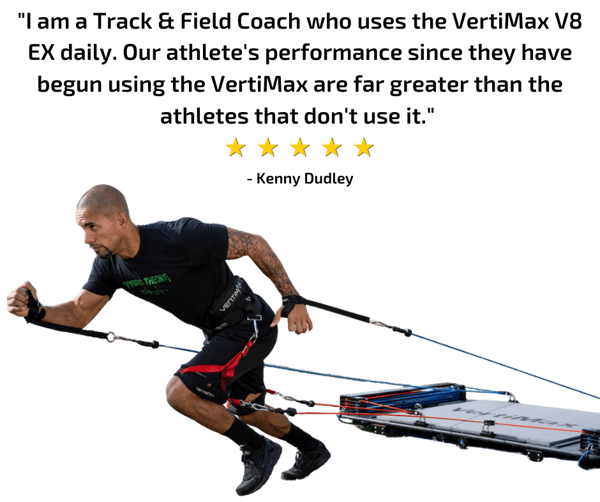 If you want to jump farther, you need to improve the force production of your lower body. However, your run-up speed also plays a huge factor. For pole vaulting, for every 1m/s you can run, you’ll be able to jump approximately 0.5m farther. This same association with increased speed and farther jump distance is also found in the long jump and triple jump. No worries as you can train every aspect of athletic ability with the VertiMax training tool.

How Does VertiMax Increase Speed To Run Faster and Jump Higher

Optimal development of track and field speed and power is achieved by maximizing the rate at which muscular force can be generated. The faster an athlete can generate force, the more explosive an athlete will be. As an athlete’s explosive power increases, so will their ability to speed up when running and jumping. However, it is very important to note that the strength an athlete develops in the weight room will not effectively translate to explosive power in track and field events unless low velocity power lifting is combined with light-load high speed training. The VertiMax revolutionary loading technique simultaneously loads and increases power in both the ground contact and airborne phases of the running motion for a much more effective speed development.  If you speed train conventionally with an elastic band attached to the waist, the primary muscles you’re overloading are the quad glute in the drive phase that’s when the foot is in contact with the ground driving.  When the foot breaks contact with the ground and starts the forward airborne motion or the knee drive portion of the recovery phase, that band attached to the waist can apply any load to the hip flexors, which are vital to drive the thigh upward pulling the leg and foot through the air to the next ground strike.  The power development of the hip flexor was not addressed during previous high speed training because until now we’ve had no way to load it while sprinting. The VertiMax band technology loads above the knee so the quad, glute, and calf are loaded in the drive phase, as the athlete pulls against two or three bands. But for the first time, we can now overload the hip flexors in the recovery phase because the instant the foot breaks contact with the ground the hip flexors have to work harder pulling the leg forward through the air to the next ground strike because of the resistance pulling on the thigh just above the knee.  See how VertiMax resistance band technology increase allows for  Speed Training With Resistance.

How To Train To Run Faster

There is a science to how to train to run faster. Check out How to Run Faster for that running science and history.  Track and Field coaches and athletes should have a solid understanding of the difference between power and strength if they want to have an effective speed training program.  To optimize running speed & quickness you need to focus on body force and acceleration, foot accelerations, and the proper running technique. 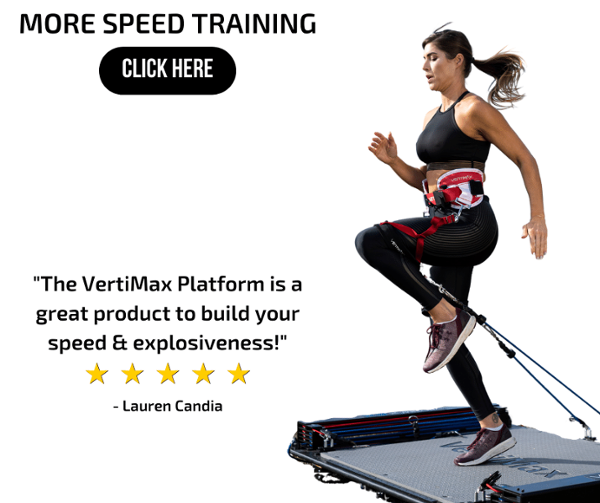 A track and field event could have dozens of different sports, making it impossible to state the specific needs of every event. However, every sport does require the advanced development of one variable; Power. Every track and field athlete NEEDS the ability to produce significant amounts of power to succeed.

The most efficient way to do this is by placing a load on the body while still performing movements with accelerated speeds. A bonus is if the athlete is able to perform similar movements to their specific sport. This concept is known as the principle of specificity, which merely states that in order for an athlete’s training to transfer to their actual sport, the movements and variables should be as similar as possible.

VertiMax has revolutionized the world of sports strength and conditioning with its intelligent design. Its effectiveness comes from the use of multiple resistance cords that can be attached to various parts of the body; the waist, legs, and arms. It uses a system of pulleys then provides constant tension no matter how much the cord is pulled. This is drastically different from similar training methods which use resistance bands whose resistance increases as the band stretches.

This genius design allows VertiMax to train athletes with a load while allowing free movement. This means that track and field athletes are able to perform biomechanically similar movements while under a load! This is the optimal method for increasing neuromuscular efficiency to produce higher force output and more power.

VetiMax was explicitly designed with the athlete in mind as a way to increase their ability of power production with the ability for it to be directly translated into improved athletic performance. 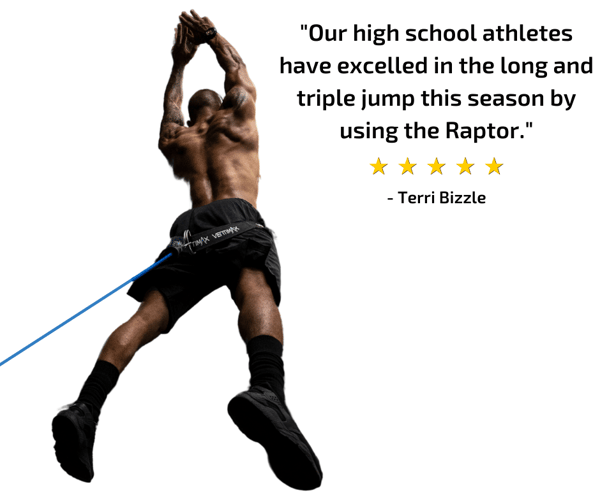 Jumping performance is an essential component of a good portion of track and field events. A few of these events include:

Events that involve jumping require incredibly high amounts of force production in the lower legs. Further, athletes will need increased neuromuscular activation in their legs as the events also incorporate a running aspect as well. This increased efficiency allows the athlete to produce more force in less time. This makes VertiMax ideal for jumping events as the ability to increase jump height and distance is one of it’s most specific purposes. It has even been proven to increase vertical jump height in scientific studies!

How To Throw Farther For Field Events Using Vertimax

The other side of track and field components includes throwing projectiles. This can include:

Throwing events require high levels of neuromuscular control to produce high amounts of force in a short time to propel an object. This makes creating explosive power the number one priority. It’s obvious that a track and field athlete needs to train his upper body for these events. However, developing power in the lower extremities has also been found to be vital as well. These events are actually full-body movements that require the upper body to propel the object and the lower body to “push”.

It is good to look at throwing events in three phases in order to maximize performance.

Why Is Strength Training Important For Track and Field Events?

Because strength training fulfills a dual role of improving performance while staving off injury, but not all strength training programs are created equal. In fact, many regimes can do more harm than good by forcing the athlete to practice a series of unnatural movements by restricting the expression of their natural form. This can lead to imbalances within key muscle groups that track stars rely on to drive them towards the finish line. If track and field athletes don't strength train in the right way they can undermine their on the track performance.  It’s been scientifically proven that strength training provides everything from bone health to the resiliency of muscles and other soft tissue. 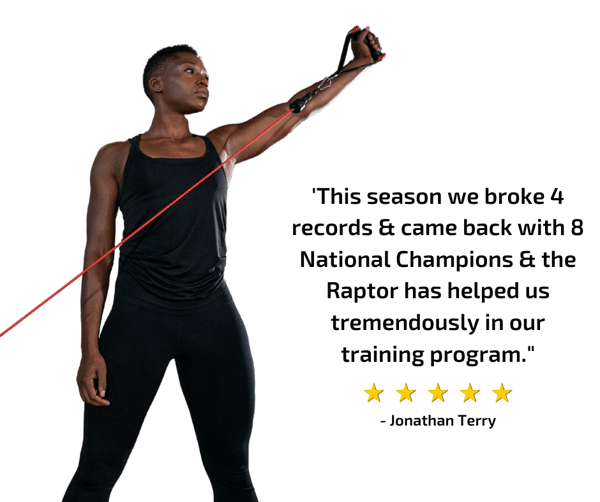 Why VertiMax V8 Platforms And Raptors For Track And Field Training

Vertimax V Series Platforms and Raptors are the only training systems that enable athletes to train with resistance while retaining their authentic running movements. This is what makes VertiMax technology such an effective tool for track and field training.

VertiMax is the best way to improve athletic speed and explosive athletic abilities. Thousands of colleges and performance centers across the US including 65% of the NFL, 50% of the NBA, 65% of Division 1 colleges now use VertiMax V Series Platforms and Raptors to develop athletic speed & power. Leading track teams use VertiMax Platforms and Raptors to improve their athletic abilities and many track and field Olympic athletes have trained and won medals relying on VertiMax equipment.

Improve Your Track And Field Performance Today With VertiMax

VertiMax is the most efficient, effective, and versatile piece of track and field training equipment. Track and field is a sport that relies 100% on the body's ability to produce power and that is exactly what it is made to do. As you can see, VertiMax can be used to improve the performance for any event that you may specifically be training for.  If you want to improve your performance and scores, you need to start using VertiMax in your training program now...because your opponents already are!

Get More Track and Field Training Exercises and Drills