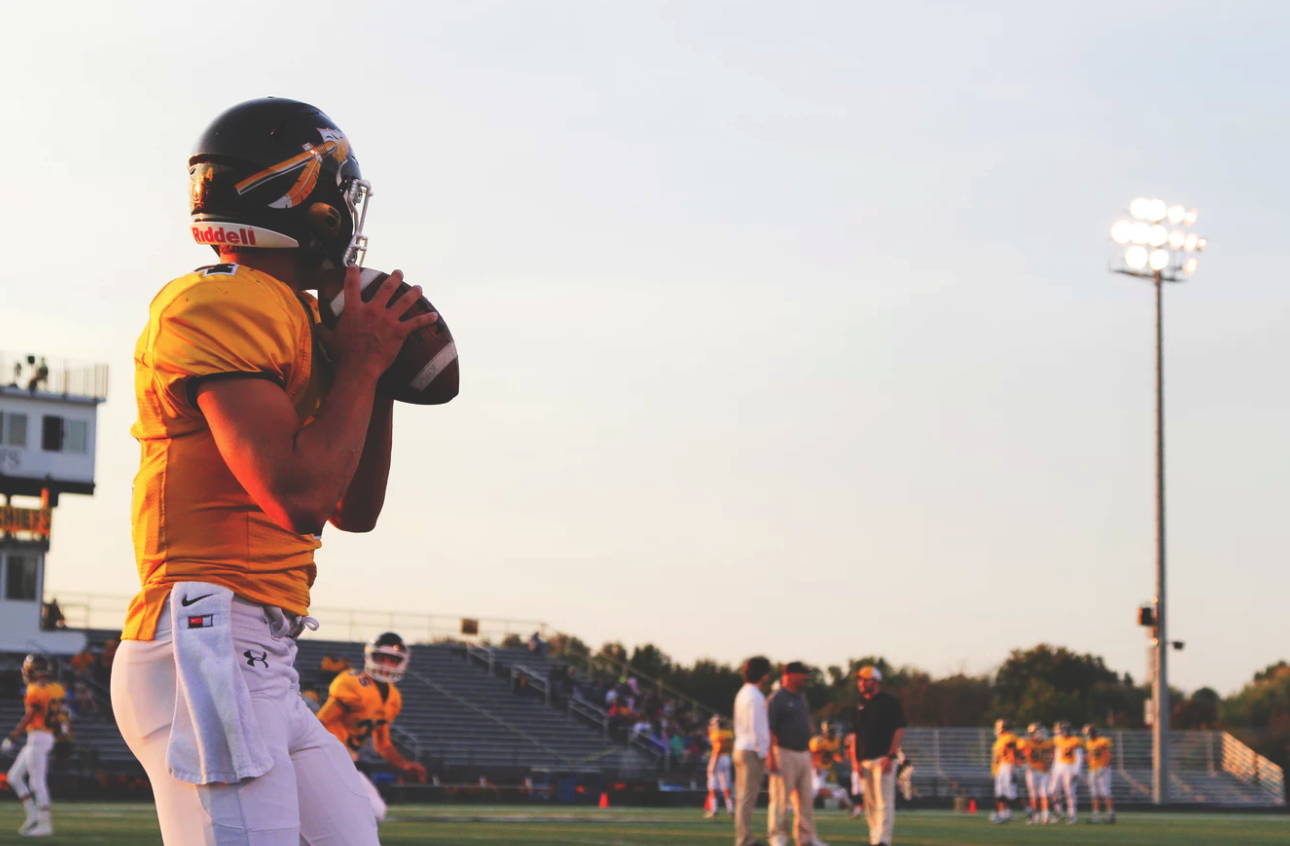 The VertiMax Raptor is quickly being adopted by elite athletes everywhere. Football players can prepare in the off-season for the intense spring training season with VertiMax. Most of the athletes below are NFL players utilizing the systems just prior to reporting to preseason football spring training and summer camps.  Already on board are NFL teams, Division 1 universities, EXOS, Michael Johnson Performance, Proactive Sports Performance and Olympic athletes just to name a few.

The videos below demonstrate the latest football practice drills utilizing the portable Raptor and Raptor EX (extended range 45 yards) resistance training systems. The Raptors will allow coaches to apply consistent horizontal loads to every movement in open field or in agility drills. This will improve the football training efficiency for strength, endurance and agility conditioning. The Raptor technology opens up a complete new football practice and training dimension for both high end performance enhancement and rehab applications to expedite an athlete's return to game day competition.  After you use these drills, view more football training ideas on the main Football Training page. 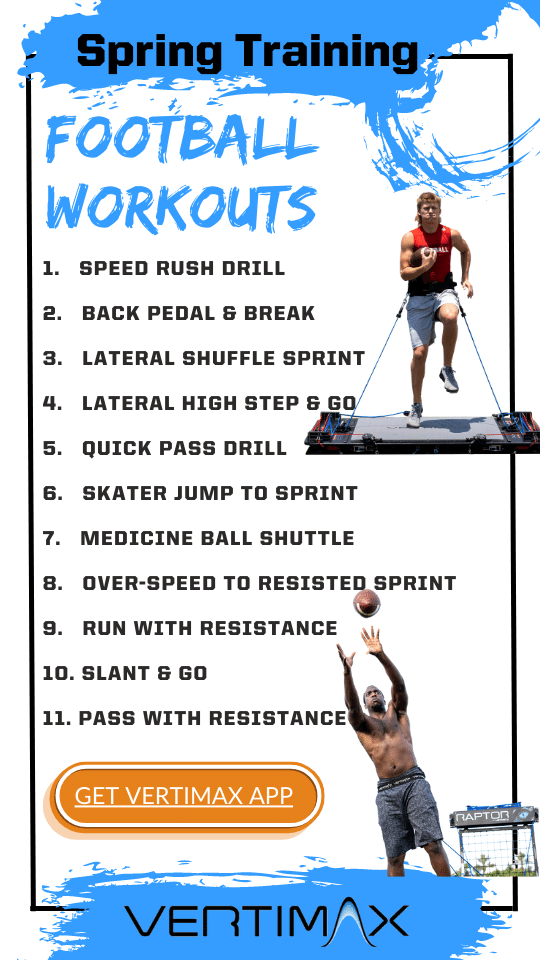 Football Drills: Raptor Speed Rush
Watch NFL Linebackers and defensive ends perform a loaded speed rush drill using the New Raptor system designed to resist the linebacker as they loop around the tackle and then assist the linebacker accelerating toward the quarterback.

The Raptors are fixed to their portable fence systems on the field with the rushing path to the quarterback mapped out on the ground with low profile cones. For this drill the Raptor unit is positioned 8-10 yards behind the defensive player who attaches the Raptor resistance bands to their waist using a 360 belt and then lines up on the imaginary line of scrimmage with rushing path laid out in front of them. The player then explodes at full speed around the rushing path working against the Raptor resistance. As the defensive player turns the corner and begins pursuing the quarterback, the Raptor resistance bands are now aiding the player’s acceleration to help condition them to accelerate coming out of the turn. Because of the Raptor’s patented system for keeping resistance stable over long distances the players can easily transition from a resisted run around the tackle to an assisted run towards the quarterback without losing stability.

Football Drills: Back Pedal & Break
Watch NFL defensive backs and linebackers use the portable Raptor system to load the back pedal and break on the ball at various angles over large distances.

The Raptor’s ability to provide elastic loading for distances of over 45 yards enables players to train with dynamic loads while performing game specific training movements at game speeds and distances that players have to cover on most plays. The player simply connects the Raptor resistance band to a 360 degree belt and they will have complete freedom of movement while loaded to conduct any defensive drill over half the area of the field. Note how fast the athletes can move with Raptor loading and how much distance drills can cover in this video without the bands ever going slack. For the first time coaches can now load multiple muscle groups involved in the back pedal, breaking on the ball, and accelerating in any direction over half the distance of the field. The added training distance allows players to achieve higher training velocities under load and thus promotes more effective strength development at higher velocities (i.e. “Speed Strength”).

This is a very common movement on the grid iron but difficult to load properly for speed development without the right loading system. The Raptor unit’s ability to keep a consistent non-varying resistance applied to the athlete over a large distance on the field now allows us to attach bands to the ankles instead of the waist. Independent ankle loading as opposed to waist loading is a big deal in this drill if you’re looking for effective speed gains. Why? Because if you do this drill with a band connected to the waist you are only overloading the muscles of the drive leg which is planted on the ground pushing. You’ll never load the muscles driving the airborne foot with a waist connection. Since the Raptor allows dual ankle connectivity you can now load the muscles in both legs independently. Anytime the athlete’s foot goes airborne, the muscles driving it through the air have to work against the resistive load applied to the airborne ankle. These muscle groups for first step quickness are never overloaded with a waist connection and hence power development in these important muscle groups are often neglected and a lot of speed potential can be left untapped. Conversely, the resistance applied to the airborne foot is transferred through the core to the drive leg and thus forces the drive leg in contact with the ground to work against the airborne foot’s resistance band. If you think about it and watch the video closely and see how the resistance bands are synchronously working the legs you will see this is a revolutionary training advancement simultaneously working both drive and recovery phase muscles to get more speed out of any athlete at any level.

Football Drills: Lateral High Step and Go
This drill being performed by NFL players at Michael Johnson’s Performance Center in McKinney Texas, utilizes the new 17 lb. portable VertiMax Raptor unit to apply a uniform elastic resistance to a running back throughout a lateral high step and acceleration drill.

Developing muscles in the legs responsible for lateral movement is critical for running backs because often the holes created by the offensive line don’t occur where they are supposed to. That’s where quick lateral movement is key to helping a back change direction along the line and get to a gap that will allow them to get down field and gain yardage. Don’t forget to stress learning to accelerate quickly out of a lateral or change of direction move! This is critical as the degree of acceleration achieved in the first few steps out of an elusive change of direction move is where the greatest opportunity to create separation from pursuing opponents can be achieved. This Raptor drill is perfect for developing both change of direction abilities and acceleration after the change of direction. The VertiMax Raptor units can apply an elastic resistance to an athlete over a 45 yard range. Thus for this specific drill having the ball carrier after crossing the last hurdle turn their hips and accelerate down field as quickly as possible for as much as 30 yards is recommended.

Football Drills: Raptor Quick Pass
This drill being performed by Buffalo Quarterback EJ Manuel and other NFL receivers utilize two portable Raptor units to independently load both the quarterback during the drop back and the receiver during their route.

One Raptor unit applies two separate loads to the quarterback’s foot and waist during the drop back while the other Raptor unit applies a load to the receiver’s waist as they accelerate off the line running short hook routes. When training outdoors or indoors on fields over 60 yards in length, the receivers can run routes up to 45 yards with resistance using the Raptor EX (extended range) systems. The ability to apply a stable elastic resistance to route running for up to a 45 yards opens up a complete new dimension in football specific strength training when it comes to increasing acceleration, deceleration and top end speed. Coaches can now dynamically load players over distances and through sports specific moves that was previously not possible with conventional training bands.

Football Drills: Raptor Dynamic Skater Jumps To Sprint
Watch NFL players use the Raptor in conjunction with a heavy Med ball to develop lateral power and acceleration speed. For this drill the Raptor band or bands are attached the waist using a 360 degree belt which will allow the player to turn 90 degrees unrestricted out of the Skater Jump into a full sprint.

The resistance of the Raptor band pulling at the waist combined with the weight and the inertia of the Med Ball create resistance to lateral movement moving in both directions as the athlete performs the Skater Jumps. Once the lateral training portion of the drill is complete the athlete transitions to the speed portion of the drill by releasing the Med Ball, turning 90 degrees and sprinting away from the Raptor unit. This drill is beneficial to players at any position on offense or defense.

8. Over-Speed to Resisted Sprint Set Up