Wrestling is a dynamic, intense, and combative sport that requires skill and tactical abilities for success. To win in the sport, wrestlers need a high level of physical fitness. Wrestling demands maximal strength, aerobic endurance, anaerobic power, and anaerobic capacity. To be effective, wrestling techniques must also be executed with speed. Enhancing the functional ability of each of these physiological qualities is the primary aim of a great Wrestling strength and conditioning coach.  Dominate the wrestling mat with VertiMax wrestling training equipment using advanced plyometric and resistance training exercises.

If you're a wrestling trainer or wrestler looking for the quickest, most effective wrestling workouts to increase explosive leg power, hand speed, and quickness, VertiMax platforms and Raptors are the perfect training system that will make it happen. VertiMax technology is now used by top wrestlers and thousands of professional athletes in every sport to develop the type of power, speed, and stamina that is going to make a difference on the mat.

VertiMax platforms are simple to use and a single system can train up to 30 athletes in under an hour. It can quickly give Wrestlers that burst of speed to gain an advantage over their opponent and provide the added power to create superior leverage for quick takedowns. VertiMax training can simulate and provide resistance against virtually any movement an opponent makes. 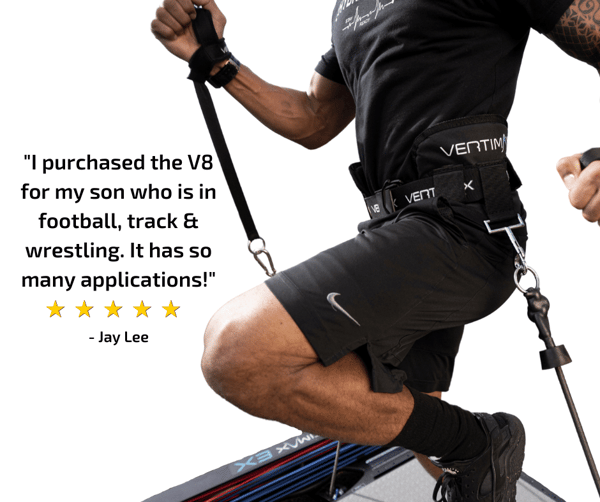 The Benefits of Wrestling Training With VertiMax

Wrestlers are perhaps the most feared fighter that exists. From the beginning of MMA and Ultimate Fighting Championship, wrestlers have always dominated the competition. They are the epitome of explosiveness, power, strength, and quickness in athletic performance. They’re also masters of grappling and the ground game.

This is why wrestlers require a versatile training tool that can improve multiple areas of performance like VertiMax.

VertiMax has taken decades of sports science that examined the muscles and power production and used it as the guide for it’s design. It systematically loads the muscles with cords that provide constant tension while allowing athletes to move freely with a huge range of motion. Using resistance training has been shown to:

Actions that were once impossible to train with resistance are now done with ease using VertiMax. Wrestlers have the choice of using a waistband, armbands, or leg band to place a load on their body. That’s 5 individual locations that can be trained depending on the intent of the exercise and what movement needs performance enhancement..  This means wrestlers now have an almost unlimited range of training possibilities and can train with the exact specificity required by their skills. 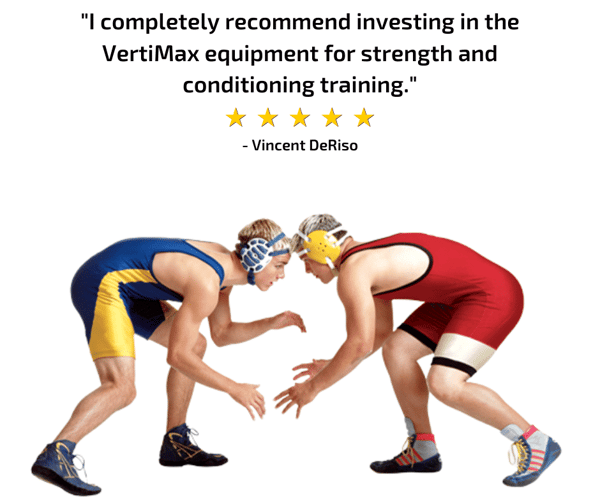 Why VertiMax Is The Best Wrestling Training Equipment For Performance

Simply put, no other piece of wrestling training equipment exists today that can even come close to the functionality, variety, and effectiveness of VertiMax. Even compared to bands and free weights, VertiMax was invented with the sole purpose of improving athletic performance by increasing the neuromuscular efficiency of functional movements.

Wrestlers can train every variable they need with this one piece of equipment, from fitness variables to specific skills. If you’re serious about wrestling, you need a serious way to train. VertiMax is definitely the most serious wrestling training tool you can have!

You can learn a lot about wrestling from looking at its history. It is one of the oldest sports, with cave paintings 15,000 years ago depicting its practice. It’s one of the very few sports to appear in the original Olympiad games (the early Olympics) and has been featured in every modern Olympic game since its inception in 1904. You can also find versions of it in almost every country around the world. This is because it’s thought to have developed as a test of manhood and mock fighting.

In other words, wrestling training can be brutal. Wrestling is a very demanding sport that requires exceptionally high levels of fitness combined with skills.

Out of all these, there is one fitness component that stands out….wrestlers must be explosive.  The one variable that differentiates wrestling from other sports, even combat sports, is the explosiveness that wrestlers have!  Wrestling is a powerful and fast sport.  Not one wrestling move is performed slowly. Not one.

At its core, wrestling is a series of explosive attacks and defenses. In fact, sports scientists have identified explosive actions as the defining characteristic of wrestling and found that wrestlers’ explosive power is even higher than other sports that require power movements.

This means that building explosive power must be at the center of a wrestler’s strength and conditioning program. This is why VertiMax is so effective at improving wrestling performance as it was specifically designed to increase the force output and power capabilities of BOTH the upper body and lower body.  It’s as if  VertiMax was made for wrestling!

Strength training with VertiMax dramatically increases explosive leg power for faster shots and improved speed on the mat. In just a few short weeks, wrestlers at all competitive levels will see dramatic improvements in explosive power from wrestling training with VertiMax. How explosive do you want to be? There are hundreds of  VertiMax wrestling drills to develop a quicker, more explosive wrestler. These drills can easily be done in a team training session by rotating your wrestlers in between sets. 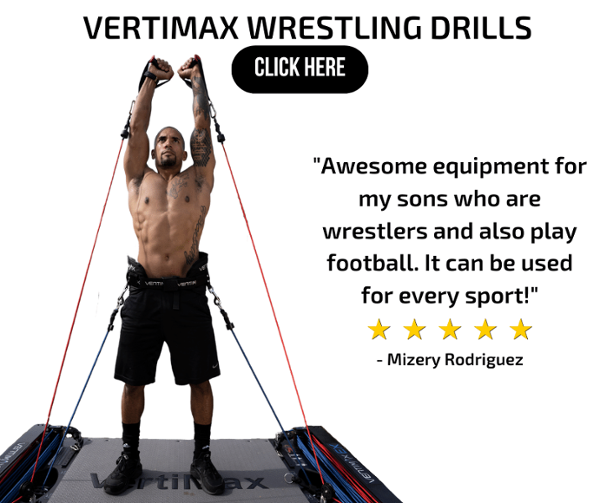 How to Develop Explosive Shots With VertiMax

Whether it’s a single-leg or double-leg takedown, wrestlers use this as a primary attack to bring their opponent to the mat.  The power and speed they perform shots dictate if a wrestler successfully completes the takedown. This makes it essential to train them with as much explosive power as possible.

VertiMax has changed the game for training shots as wrestlers can use loaded resistance training during actual shots for true functional adaptations.  Athletes can increase their power production while performing the same drills as they always have meaning a trainee is not just improving their leg power; they are improving their leg power in the way it’s used to shoot!

How To Train For Powerful Sprawls

The only defense to an explosive shot is a powerful sprawl. What used to be limited to training with only bodyweight can now utilize the innovative design of VertiMax to produce a defense move that is hard to catch. A successful sprawl depends on an initial explosive reaction of kicking your legs followed by powerful hip extension if needed to free your legs.

VertiMax can be used together with traditional sprawling drills that train sprawls to create a stimulus that demands more firing from the posterior muscles to drive the legs back. This also increases the reaction time and quickness of the movement.  Further, because of the unilateral training allowed by VertiMax, wrestlers can train single leg or double leg sprawls.

A wrestler with a hard and fast sprawl is very difficult to take down.  You can create one training with VertiMax.

How To Build Power For Lifts And The Bottom Positions

Standing up from this position requires very high levels of force and strength.  However, VertiMax delivers the perfect training stimulus on a wrestler by requiring more power with the cords to drive up .Because this tension is constantly pulling on the athlete, it further simulates an opponent who is continually trying to push you back down.

How To Use Vertimax For Wrestling Conditioning

Depending on the conference and competition level, a wrestling match usually consists of three rounds lasting two minutes a piece. This places a high priority on developing the anaerobic systems as these are responsible for providing energy during a match and the determinant moments of a match.

Wrestlers rely most heavily upon the glycolysis system during their matches as this is the primary metabolic system that supplies energy for events up to two minutes, precisely the length of a period. It has been suggested that these systems are responsible for providing 90% ATP during a wrestling match.

This means that when speaking strictly of being successful in an actual match, the anaerobic metabolic systems are more important to a wrestler than the aerobic system.

Proper conditioning ensures a wrestler not only has the endurance to last a match and tournament, but to handle all the training that goes on in preparation to compete. That also means it’s important to train the whole body, since successful wrestlers use every muscle and body part to get out of uncomfortable or challenging situations.

VertiMax Wrestling Training Is Perfect For All Ages And All Levels

You don’t need to be an elite wrestler to use VertiMax (although they use it too). Don’t confuse it’s effectiveness with complexity.  Because VertiMax uses natural movements to improve power, it’s actually easier to use than traditional strength training implements such as barbells and kettlebells.

Furthermore, it’s safer. VertiMax offers a smooth and consistent resistance on the muscles, which prevents the jerking motion that’s often experienced with resistance bands. Plus, because the load is attached to either the limbs or waist, the back and neck are free from stressful loads.

VertiMax comes with a range of bands, making it perfect for athletes of all ages and experience levels. In fact, starting youth on a training regime early can better improve their movement patterns and biomechanics. This is why using VertiMax with youth wrestlers is perfect to set them up for a successful career!

Colton (who is only 9 years old!) is already making crazy gains in his performance and power!