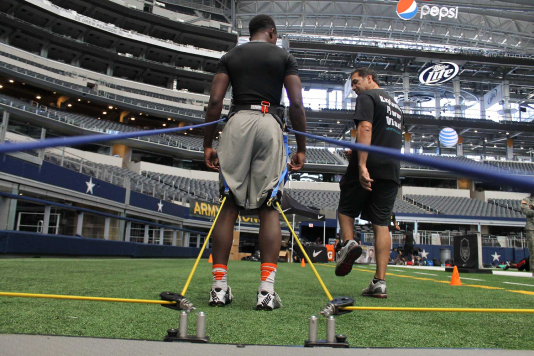 Vertimax is the leading exercise technology company for professional athletes. Period. Used by over 40% of professional teams in the USA (including the MLB, NBA, NFL, and NHL), the Vertimax has proven its effectiveness time and time again. But don’t take our word for it – take theirs. Professional athletes from around the sporting world have had great things to say about the Vertimax – as well as their favorite workouts and tips for aspiring athletes.

“I was introduced to VertiMax through the Blue Jays. VertiMax has helped me in all aspects of my game. After a few workouts, I started to notice improvement in both my leg and arm power. This has increased my vertical, which has also helped my defense in the outfield. Meanwhile, the adjustable resistance bands I use during my hitting drills have added power to my swing. I can’t wait to get my own unit!” – Colby Rasmus, Tampa Bay Rays

The Vertimax is a crucial tool for improving strength in the key muscle groups that make all the difference in baseball. Whether you’re trying to improve your batting game or track down deep fly balls in the outfield, Vertimax workouts will take your game to the next level.

“It helps me due to the fact that I get used to weight pulling me down. Then in the game when I run down the court, there’s no more weight. I’m now jumping freely, so of course it’s gonna raise my vertical, help me jump higher, help me jump more explosive. That’s how it’s helped me tremendously.” – Karl Anthony Towns, Minnesota Timberwolves

Explosive power is key to basketball success, and training with the Vertimax is key to building explosive power. The following drill is credited with improving vertical jumps all across the NBA.

“It makes you turnover a lot quicker, a lot faster, so if you’re chasing a ball, breaking away, chasing a tackle, your body’s used to running above normal speed. With resistance, it’s pulling you back, so it’s making you work harder.” – Carlin Isles, World Rugby’s Fastest Man

Rugby and football demands intense exertion from athletes – and so does the Vertimax. As Carlin Isles testifies, the tool allows players to practice fighting resistance as well as keeping up with its pull – it builds both strength and speed, the two ingredients of explosive power.

“I’m able to be free, use my free form, go into my 3 Pt. Stance, and gain all the resistance of the Vertimax. That way I don’t have to change my body or use an awkward pose to get the resistance I would get in the gym, I can go straight to the Vertimax.” – Justin Gatlin, America’s Fastest Man

Finally, there’s the ‘purest’ sport on land – track. Track athletes must lay it all on the line without resorting to tricks of technique. Vertimax may be the only trick that champions like Gatlin can use to get ahead of the competition.