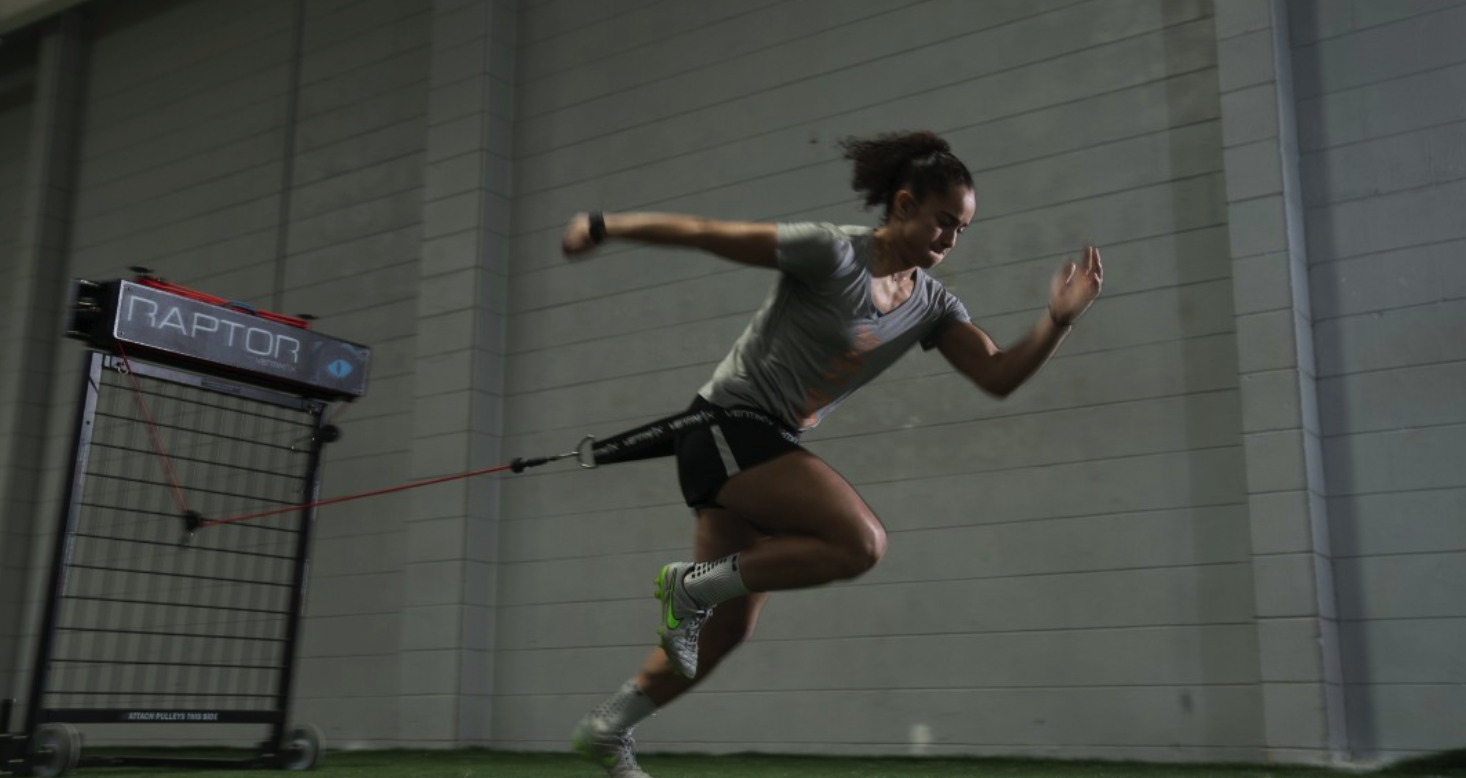 Why VertiMax is a Great Speed Training System

Speed is required if you want to be a top athlete in any sport.  You need to do more than just lift weights for speed training which is why VertiMax is a great speed training system.  Let’s discuss speed for a little bit. Any coach will tell you that speed is the difference maker when it comes to an athlete's sport. A majority of your best skill athletes are your fastest athletes. When looking further into speed you have 5 types of speed that most athletes train; acceleration speed (from stop to go), deceleration speed (from go to stop), lateral speed (from side to side), linear speed (running in a straight line), and change of direction. All of these types of speed can be improved on with a great speed training program and speed training equipment. Some coaches will say “to get fast you need to lift weights” which is partially true, but if you want to be fast then you need to train fast!

Coaches will load up athletes in the weight room with weights so why not add a light load on to athletes when they run?  This is where VertiMax can help with that. You can’t have athletes running with weights because all of that force is going straight down through the athlete and into the ground as well as it’s just not a safe option.  The VertiMax can load athletes so that the force is horizontal to give them resistance that’s applicable to the way they move on the field, court, etc.

Can’t I just use sleds to push/pull or regular bands?  Of course you can and you should; however, when comparing the VertiMax technology to sleds; how can you change direction when running with a sled?  How can you sprint out 10 yards and back 5 yards with a sled? What happens when you’re pulling a sled and you stop or stutter step? The sled doesn’t move with the body well when doing sports-specific speed drills on the field.  It’s great and a fantastic way to train athletes, but you need to be able to train athletes like they’re playing their sport. Regular bands work too, but they are limited. First off, they only stretch a certain distance before it’s pulling the athlete back.  And second, someone needs to hold the band which isn’t optimal if you’re trying to coach speed.

The VertiMax also auto-retracts back into the system which gives the athlete a chance to train over-speed.  Over-speed training is basically forcing an athlete to run faster with assistance so the athlete is training to stress the body for high velocity speed; think of running down a hill.  The assistance also forces the athlete to turn on stabilizers if they’re running assisted and need to stop which is key to any deceleration training. The athletes that can stop the fastest, recover the fastest and get right back into acceleration are typically your noticeably faster athletes in their sport.

Optimal development of athletic speed and power is achieved by maximizing the rate at which muscular force can be generated. The faster an athlete can generate force, the more explosive an athlete will be. As an athlete’s explosive power increases, so will their ability to speed up and jump. However, it is very important to note that the strength an athlete develops in the weight room will not effectively translate to explosive power in competition unless low velocity power lifting is combined with light-load high speed explosive training. The VertiMax revolutionary loading technique simultaneously loads and increases power in both the ground contact and airborne phases of the running motion for a much more effective speed development.  If you speed train conventionally with an elastic band attached to the waist, the primary muscles you’re overloading are the quad and glute in the drive phase that’s when the foot is in contact with the ground driving. When the foot breaks contact with the ground and starts the forward airborne motion or the knee drive portion of the recovery phase, that band attached to the waist can apply any load to the hip flexors, which are vital to drive the thigh upward pulling the leg and foot through the air to the next ground strike. The power development of the hip flexor was not addressed during previous high speed training because until now we’ve had no way to load it while sprinting. The VertiMax band technology loads above the knee so the quad, glute, and calf are loaded in the drive phase, as the athlete pulls against two or three bands. But for the first time, we can now overload the hip flexors in the recovery phase because the instant the foot breaks contact with the ground the hip flexors have to work harder pulling the leg forward through the air to the next ground strike because of the resistance pulling on the thigh just above the knee.

VertiMax’s advanced resistance technology allows athletes of all ages to train in the horizontal plane with loads on specific areas of the body that result in extraordinary athletic performance improvements. VertiMax technology is used by leading world class Olympic athletes, professional athletes, and college, high school, and youth sports athletes. VertiMax is not only used by the leading sports teams, coaches, trainers and athletes use it for fitness and sports training at home, in gyms, fitness centers, and studio around the world. VertiMax improves performance on and off the field like no other sports performance equipment in the world. Watch the video to learn more about VertiMax and why it is used and trusted by so many leading coaches, trainers, and athletes.

One of the most popular accessories of the VertiMax technology is the 360 belt that’s included. The athlete simply steps into the belt (large loop), pulls it up on their waist and can begin training. It’s very easy to get in and out of, especially if you’re training multiple athletes. Your athletes won’t have to fidget with the belt as the over-sized loop allows for easy transition. The belt also allows the athlete to change direction while loaded with resistance. An athlete can back pedal and turn to a 180 sprint all while connected to the band. Sports involve more than just linear movement and the Raptor allows athletes to train in any direction.

VertiMax V8 EX for speed training  The V8 EX “Extended Range” Platform extends off-platform training distances out to 60 feet.  The V8 EX is designed to help train for the longer distance allowing the athlete to reach much higher resisted training speeds.  The ability to train at higher velocities with consistent resistance will stimulate the athlete’s neurological and muscular systems to work collectively.  This will help develop more output power at higher speeds, which translates to “Speed Strength”. If you are looking at improving top end speed, the V8 EX provides a significant advantage over the V8 due to higher achievable resisted training velocities. Trains up to 5 athletes at one time.

VertiMax Raptor EX speed training  The VertiMax Raptor EX has one extra long band which can be used to train distances over 40 yards.  By being able to reach top speed for longer distances, this will have a direct impact to your top end speed gains. Not only will it increase linear speed, but also lateral speed, change of direction and sport specific moves. The Raptor EX can be used individually to place one point of resistance on an athlete, or it can be combined with multiple Raptor EX units to become a dynamic training system, providing up to three points of minimally varying resistance over long distances to truly maximize speed gains.  Trains one athlete at a time. Check out this YouTube Video:  Why VertiMax Raptor Ex is a Great Speed Training Device