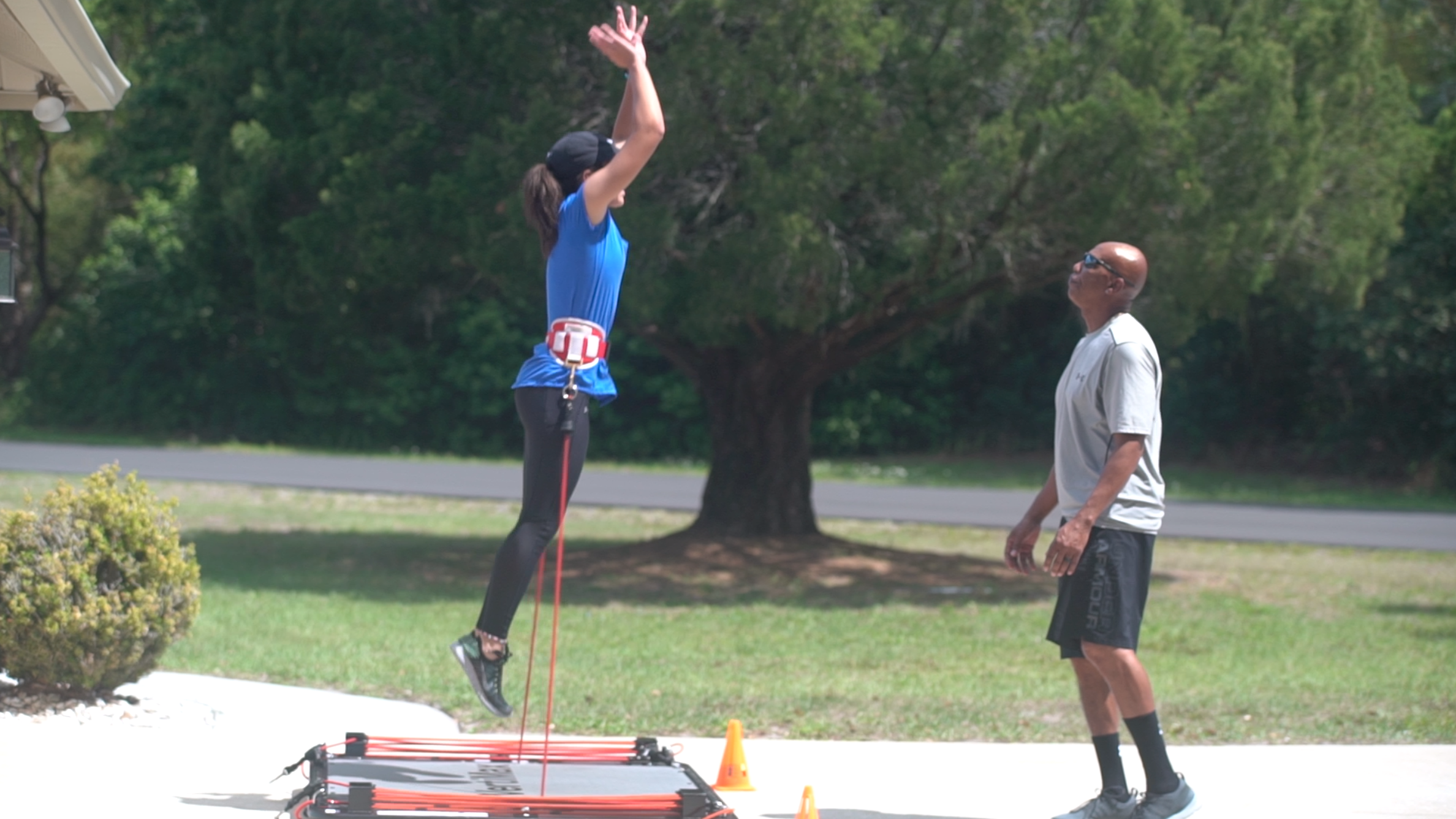 VertiMax provides the most advanced jump training and speed training system in the world. With the ability to load the legs and arm swing while jumping and the waist and feet while performing defensive drills, we’ll tap into vertical performance and speed your players never knew they had. The biggest increases you’ll see in competition are your player’s hitting, blocking and digging percentages.

This bumping drill increases the power in the leg drive muscles to improve acceleration to help obtain proper position in front of the ball before bumping and also to promote use of the legs in the actual bumping motion.

Note how the resistance bands of the V8 system are uniquely attached just above the back side of each knee as opposed to the conventional method of attaching a resistance band to the waist. Attaching resistance bands behind each knee and transferring the load to the thigh just above the knee allows coaches to simultaneously load both set of muscles used when the foot is in contact with the court driving (quad, glute & calves) and uniquely load the hip flexor muscles primarily use to drive the leg through the air when the foot breaks contact with the court. This drill is more efficient than conventional methods to improve overall court speed and first step quickness.

This blocking drill utilizes a mobile Raptor system to apply a lateral resistance to the waist of a volleyball player while sliding laterally at the net to properly position themselves to block.

The resistance directly loads the leg muscles involved in lateral acceleration to improve power and thus increase the lateral speed of the player at the net.

The benefits of this drill will translate to your players being able to move faster laterally and place themselves in proper blocking position more often in games, especially when they are out of position defensively with minimal time to position themselves properly to block effectively. Because the Raptor system does not allow the athlete to feel any appreciable change in resistance as they move across the court players can easily maintain their balance and stability in both the take-off and landing. Note how the player does not move laterally while airborne in this drill. Because the load is relatively non-varying athletes can neurologically adapt to and counter the lateral load without even thinking about it during take-off and landing to safely maintain stability.

The V8 Platform trainer is both the world’s leading vertical jump training system with the capability to load both the legs and arms simultaneously while jumping and an off platform speed training system.

For the V8 Blocking drill the platform’s leading edge is placed directly under the net and resistance bands are connected to the player’s waist and/or wrists to load all major muscle groups involved in the jumping and blocking motion. A hitter on the opposite side of the net hits balls in the general vicinity of the player strapped into the V8 system while player leaps and times the blocking movement to deflect the ball back to the hitter’s side of the net. Fifteen to twenty repetitions are suggested. Note how the resistance bands retract into the platform and never go slack so the jumping resistance acting on the athlete does not change from the athlete’s perspective. Gravity doesn’t change in the middle of a jump and neither should your jump training resistance if you want to maintain stability and put forth 100% effort for maximum power development benefits. Arm swing velocity accounts for 10-13% of your vertical jump height. The fact that the V8 is the only system in the world capable of loading the arms when jumping provides another significant benefit if you are looking to maximize your athletes’ vertical jump potential.

The portable Raptor unit has two individual resistance bands with adjustable resistance. When the Raptor is centered on the net’s support post, each band can train an athlete on either side of the net.

This allows two athletes (one on each side of the net) perform a resisted, lateral blocking drill where they mirror each other’s lateral movement at the net positioning themselves for sequential blocking movements across the complete span of the net. Suggested training reps are 4 lateral slides with multiple blocks while moving away from the Raptor and then performing a side shuffle back to the starting point after reaching the far end of the net. Then switch sides to load the muscles on the opposite side of the body and perform 4 more reps. Suggested rest between reps is 30 to 60 seconds. The Raptor’s ability to keep resistance relatively constant for distances of over 100 feet allow the athletes to perform this drill traversing the complete span of the net without feeling any significant changes in resistance. This drill will increase power in the muscles that promote lateral acceleration and allow your players to position themselves more quickly on the defensive side of the net.

This drill utilizes the Raptor units to apply a highly stable (non-varying resistance) to hitters while performing actual hitting drills. Using a 360 belt to attach the resistance bands to the waist while the opposing end exits the Raptor at ground level, creates both a horizontal and vertical loading vector to work against for both the approach and takeoff.

The players perform their approach and takeoff just as they do in a game situation working against the applied load. This drill would be extremely difficult to perform with a conventional resistance band because of the radical increase in resistance that would occur when the athlete approached the net and through liftoff. However, since the athlete will not detect any change in resistance with the Raptor band through the approach and liftoff, they can maintain stability through liftoff and landing. In the slow motion portion of this video note how stable the female athlete is both on takeoff and specifically the landing even with a lateral load applied.