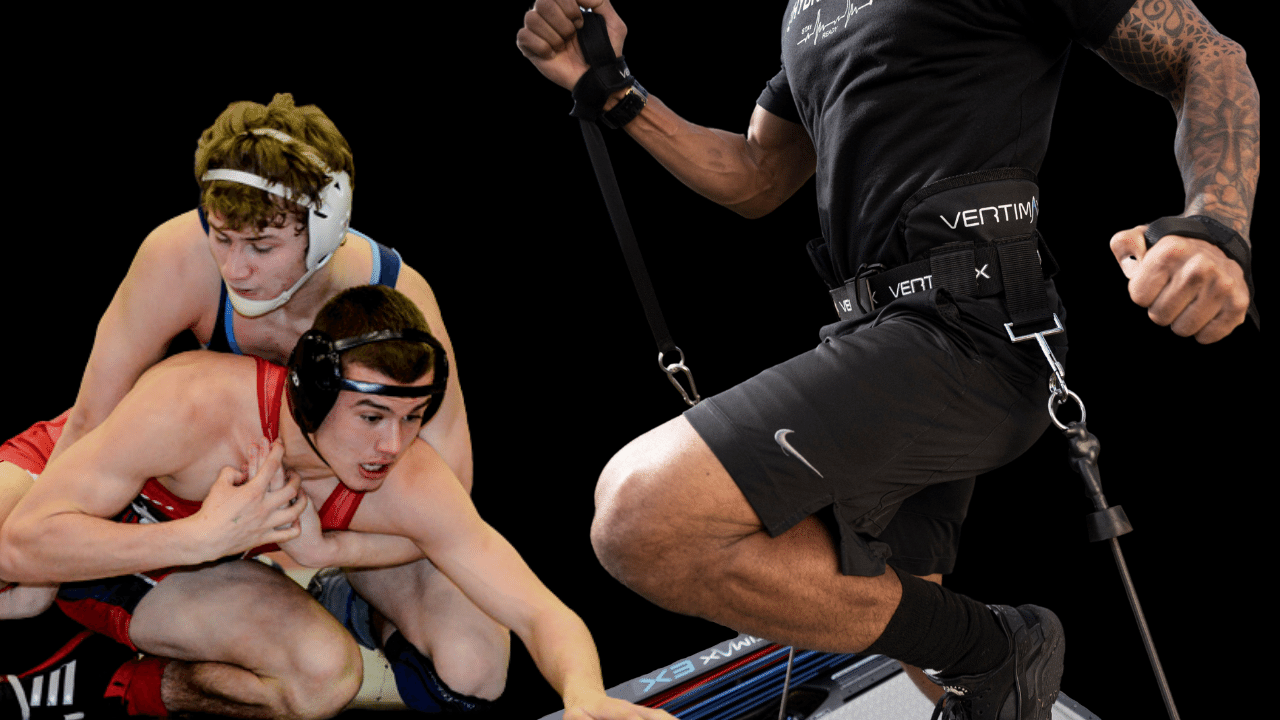 How explosive do you want to be? There are hundreds of  VertiMax wrestling workouts and drills to develop a quicker more explosive wrestler. VertiMax has revolutionized wrestling training. These drills can easily be done in a team training session by rotating your wrestlers in between sets.

VertiMax is the most influential wrestling training tool to hit the market in decades. It has completely revolutionized the way wrestlers can train and build power and strength while performing dynamic movements.  Where traditional sports and conditioning practices stop at building power and strength, VertiMax goes beyond this (but it does that too!) and allows athletes to increase their efficiency in specific movement patterns.  This means the improvements made in wrestling training using VertiMax are directly transferred into actual improvements in wrestling performance! VertiMax brings a whole new meaning to the specificity of training in wrestling.

VertiMax can be used to perform a variety of wrestling drills such as:

How To Develop Explosive Shots With VertiMax

Whether it’s a single-leg or double-leg takedown, wrestlers use this as a primary attack to bring their opponent to the mat.  The power and speed they perform shots dictate if a wrestler successfully completes the takedown. This makes it essential to train them with as much explosive power as possible.

VertiMax has changed the game for training shots as wrestlers can use loaded resistance training during actual shots for true functional adaptations.  Athletes can increase their power production while performing the same drills as they always have meaning a trainee is not just improving their leg power; they are improving their leg power in the way it’s used to shoot!

Check out Coalton showcasing how VertiMax can be used with shot drills!

How To Train For Powerful Sprawls With VertiMax

The only defense to an explosive shot is a powerful sprawl. What used to be limited to training with the only bodyweight can now utilize the innovative design of VertiMax to produce a defense move that is hard to catch. A successful sprawl depends on an initial explosive reaction of kicking your legs followed by powerful hip extension if needed to free your legs.

VertiMax can be used together with traditional sprawling drills that train sprawls to create a stimulus that demands more firing from the posterior muscles to drive the legs back. This also increases the reaction time and quickness of the movement.  Further, because of the unilateral training allowed by VertiMax wrestlers can train single leg or double leg sprawls.

A wrestler with a hard and fast sprawl is very difficult to take down.  You can create one training with VertiMax.

How To Build Power For Wrestling Lifts And The Bottom Position

Standing up from this position requires very high levels of force and strength.  However, VertiMax delivers the perfect training stimulus on a wrestler by requiring more power with the cords to drive up .Because this tension is constantly pulling on the athlete, it further simulates an opponent who is continually trying to push you back down.

VertiMax can be used for wrestling drills to improve all these moves with the unique functional training only it can deliver.

Here is a great video showing how VertiMax can be used to create some insane lifting power!

Depending on the conference and competition level, a wrestling match usually consists of three rounds lasting two minutes a piece. This places a high priority on developing the anaerobic systems as these are responsible for providing energy during a match and the determinant moments of a match.

Wrestlers rely most heavily upon the glycolysis system during their matches as this is the primary metabolic system that supplies energy for events up to two minutes, precisely the length of a period. It has been suggested that these systems are responsible for providing 90% ATP during a wrestling match.

This means that when speaking strictly of being successful in an actual match, the anaerobic metabolic systems are more important to a wrestler than the aerobic system.

Improving the anaerobic conditioning has been made easy with VertiMax.  Using interval training or HIIT is highly effective to improve these systems and can be easily manipulated to mimic actual competition conditioning needs. However, wrestling conditions never occur free of resistance. There’s always an opponent grabbing, pulling, pushing, or trying to throw you. This is where VertiMax comes into play.

VertiMax’s unique system allows resistance to be applied to the waist, both arms, and both legs at the SAME TIME! This stimulates more realistic conditions as the wrestler must always be working against 5 points of resistance.

Work to rest intervals during an actual match are about 2:1 to 3:1, with the average work interval lasting around 30 seconds. Use VertiMax with interval training with these parameters for anaerobic conditioning specific to wrestling.

Checkout Bulldog Strength and Conditioning's athlete getting in his cardio work for his wrestling training while pushing through the resistance.

Further, VertiMax can also increase the muscular endurance of a wrestler as constant tension is placed on the arms and legs during training. This is vitally important as wrestlers need to use their limbs for the entire match, especially the upper body. Even when the wrestler is not actively grappling or holding their opponent, they always have their arms up to block their opponent, move their hands, or free their limbs. This must go on for the entire match.

This is why muscular endurance in the arms has specifically been identified as a determinant factor in wrestling success. Increasing neuromuscular efficiency of a muscle has a direct influence on it’s endurance making VertiMax the perfect tool for the job.

Through a combination of ballistic and plyometric exercises for wrestling (ball throws, ballistic push ups, and general strength building (pushups, chest press), VertiMax can build the muscle endurance a wrestler needs to make it the whole match.

VertiMax can give classic wrestling drills an immediate upgrade. The cradle drill is a staple in the wrestling room to improve a wrestler’s mobility on top and improve their reaction speed and agility to get in position upon an opening.

The cradle drill can be performed precisely the same but with resistance attached to the top wrestler’s legs. This will require higher muscle activity and force to be able to transition from side to side. The stimulus given will create a wrestler with a much higher level of agility and stamina when working their opponent.

Wrestling Drills To Increase Speed And Agility With VertiMax

Wrestlers need fast feet AND fast hands. Even when wrestlers aren’t engaged in actual grappling, they are ALWAYS moving for a variety of reasons:

Even some offensive moves like a “head snap” require fast and powerful hands. Wrestlers also need to be able to jump and dodge attacks. This requires extremely swift movements and reaction times.

Wrestlers can develop this quickness and speed to a much higher degree with the use of resistance provided by VertiMax.  Because natural movements are able to be loaded, wrestlers can build greater neural efficiency  in their movements. This results in a quicker, faster, and more powerful movements during a match.

VertiMax can also be easily integrated into plyometrics, and ballistic exercises for wrestlers. The tension that is applied to the wrestler from the multiple bands creates a greater demand on the muscles, enhancing the effectiveness of these exercises. Further, the wrestler’s hands and arms are free that allows them freedom of movement and offers a degree of safety that can’t be provided from other resistance training tools, such as rubber bands or holding weight. 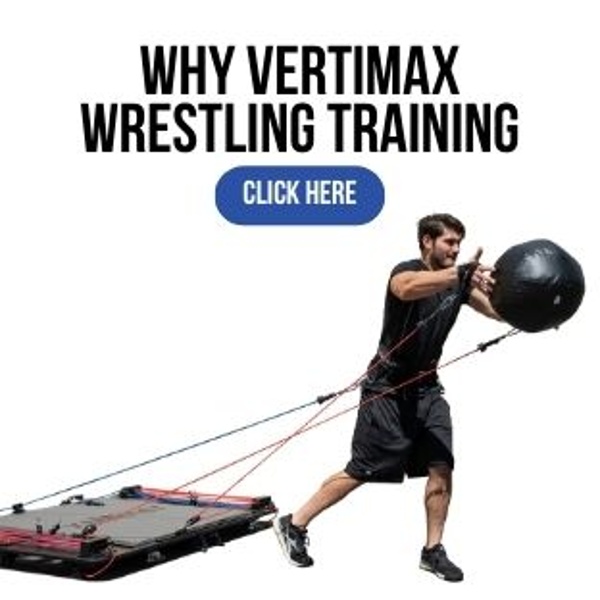 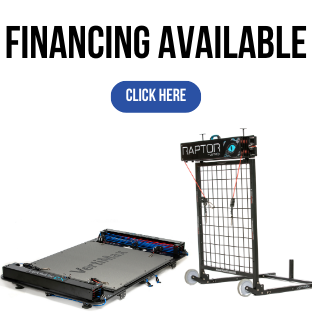