Explosive power and strength development for the lower body supports the need for sprinting, fast acceleration, and change of direction speed. Players also need to improve upper body explosiveness  to help throw harder and longer as well as increase the strength of the forearms and core.

VertiMax lacrosse training has proven to be the most innovative and effective way of improving athletic performance. Its design utilizes multiple resistance cords attached to various parts of the body to offer smooth, consistent resistance. Simply put, VertiMax will help increase the overall playing capabilities of a lacrosse player. If you are a lacrosse coach, you definitely want your team to use VertiMax.

When you implement VertiMax into a lacrosse strength training program for a lacrosse athlete, they will be able to:

As mentioned, increasing the explosive power of the lower body is vital for a lacrosse player. One of the best ways to do this is through resisted jumping movements such as ones which can be performed with VertiMax.  In fact, VertiMax has been proven in published studies to increase the lower body power of trained collegiate athletes!

Squat jumps are perhaps the best and most effective way for improving lower body power to improve athletic performance. These are usually performed with some sort of load in the form of a barbell or free weights. This is effective but has some pitfalls such as safety issues and neglecting the use of the arms. VertiMax fixes both of these problems by allowing free movement of all limbs as the resistance is attached to the body. Even more unique, resistance can be connected directly attached to the arms, legs, and waist to alter the training stimulus.

To make this VertiMax exercise specific for Lacrosse, have the athlete hold up their stick to replicate jumping for the ball.

Horizontal power is also vital to assist with the sprinting abilities of lacrosse players. Performing the broad jump is one of the most straightforward and specific exercises to do this. Again, with the use of VertiMax, an increased

Similar to squat jumps, resisted cycle lunges are performed by attaching VertiMax to the athlete’s waist. The player will then drive up forcefully, which will propel them into the air where they will switch the position of their legs and come down. The athletes can perform this in single repetitions to maximize power production or perform in succession to train their anaerobic endurance.

Or you can perform split squat jumps without alternating the legs.  This is actually one of the movements used in the study above.

Resisted sprinting is the simplest yet most specific drill there is to improve speed. More importantly, it has been shown to be even more effective in acceleration which is even more vital for lacrosse players. When performing sprints, lacrosse players would receive more benefits when the distances are kept shorter. Do this in an intermittent fashion to further replicate actual playing conditions.

Checkout Can't Stop Training athlete, Madison Mayer, showing you exactly how to push through that resistance.

Assisted sprinting with VertiMax can help improve maximal speeds of lacrosse players and help with their foot turnover by having them run above their max velocity.  Performing assisted spraining with VertiMax is superior to other methods as it applies a smooth and constant resistance and doesn’t require the need of a vehicle. Other methods of assisted sprinting such as running downhill can alter the biomechanics of a lacrosse player, which does not translate into actual performance.

Basic drills such as 505 and T-agility drills are becoming more popular as a way to test the agility of lacrosse players. This is because they replicate the movements which are needed for a lacrosse player to be successful. Performing a series of multi-directional cone drills with VertiMax will further enhance the firing of the neuromuscular system. This will help enable lacrosse players to move freely on the field with a quickness!

This should give you a good idea of how to use VertiMax with cone drills.

During real play, lacrosse players don’t know where they will need to go and must be able to make decisions and turn them into actual movement without thinking. This can be trained quite simply with numerous methods using VertiMax. Still, the idea is the same in that the lacrosse player must react to signals.

Having VertiMax attached to the player, they will need to be able to produce more force AND fight the added instability.

One aspect of lacrosse that makes it stand out from most sports is the component of using a stick to run with the ball and throw it. A player must maneuver down the field while maintaining control of a ball while also passing, catching, and shooting. To do this, lacrosse players utilize various methods to throw the ball, primarily being thrown overhead or side-arm. Due to the extreme versatility of VertiMax, players can increase their explosiveness for shooting.

This movement simulates a throw with the same biomechanics except with resistance added to the movement. VertiMax can be attached to the wrists of the athlete to perform this movement. The player can get in position with us without a ball and simulate the motion.

Even more beneficial is that with VertiMax’s design, it can actually be attached to the stick.  This gives it the unique ability to apply load to the implement being moved rather than the body which demands the player to overcome the added resistance with more force and power production.

There are two ways that you can perform this exercise and can be done using either an overhand throw or a sidearm throw.

This exercise trains the athlete to have a faster and more explosive draw. Similar to above, VertiMaxwill be attached to the player’s arms as they hold a stick. While facing VertiMax, the player pulls the stick back utilizing the same biomechanics. Further, the player can also immediately perform a throw and allow VertiMax to generate faster speed.

Another aspect that is involved with stick skills is picking up the ball from the ground. This requires precision, speed, and balance so that a player can pick up the ball on the move.  VertiMax can be added to either resistance from the back or create a horizontal load to emphasize balance and the stability needed.

Here’s a great example of a VertiMax athlete improving his ground skills.

Having control of the stick is vital to a lacrosse player.  A player wants to have the stick in front of the body and close.   This is to protect the ball while running with it.  Improving the ability to maintain control of the stick is easy to accomplish.  To do this attach Vertimax to the stick while a player is running.  They can just run straight or weave through cones.  To enhance the pull, have the player either run horizontal to VertiMax or off to the side in parallel so that VertiMax will pull on the stick. 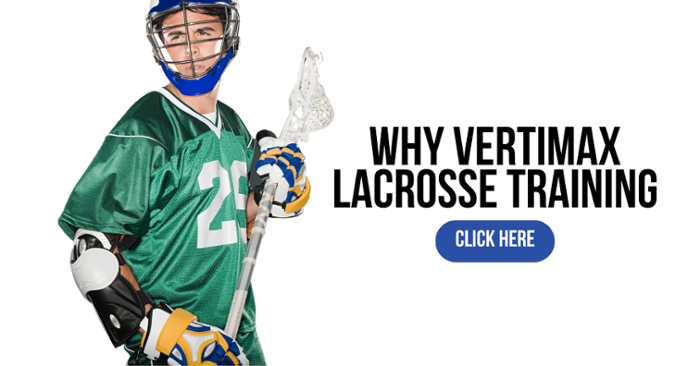