There is a lot of serious training required by college baseball players to get to the NCAA Baseball World Series. See how the teams in the college world series developed their skills to win the championship.

The NCAA College Baseball World Series is at Charles Schwab Field in Omaha, Nebraska. You can catch the games from June 16th through June 27. It will feature the number five ranked national seed Texas A&M (42-18), against Oklahoma (42-22). The bracket is stacked with some incredible teams this year, so the World Series should be an absolute blast to watch.

Statisticians love to talk percentages with baseball, and they should. The movie Moneyball highlights why baseball is not just a game of feelings but a game of statistics. However, statistics only go so far, especially when the team's statistics are so close in averages.

The Tennessee Volunteers' pitching was phenomenal coming into the post-season, with an Earned Run Average (ERA) of 2.38. Tennessee also had an On-Base Percentage (OBP) of .419, which was the fifth-highest in the league. But those statistics alone weren't enough to get to the final games. The Texas Longhorns, the favorite to take this year’s World Series title, were not far behind Tennessee with an OBP of .412.

It’s tough to know who will win and whether defense or offense will be the key to victory. But, generally, the tighter the pitching and the better the offense (e.g., the higher OBP), the higher the likelihood of winning. That’s why it’s essential to have a team that excels in both realms.

So, if you’re struggling offensively or defensively, we’ll give you a few tips and cues on and off the baseball diamond to help clean those statistics up.

Tips For Winning The World Series

In most sports, a good defense is a good offense, and baseball is mostly the same. If you prevent the other team from scoring runs, you increase your chances of winning; it’s pretty straightforward. However, we can take this one step further in baseball by looking at something called LOB, or runners Left On Base.

When a team has a high LOB, it means they often leave runs on the field, which is not helpful. Those are runs that could have scored. As a result, we often attribute a higher LOB to an unsuccessful offense. In reality, we can attribute LOB to the opposing team's solid defense.

It’s not as easy to measure unless you look at the statistics game by game. However, teams with statistically better defenses often bolster the opposing team's high LOB percentage.

In other words, if you have a killer defensive field, you’ll have a significantly greater chance of winning.

Practice makes progress, which is why field practice and drills are so common in baseball. Most players do defensive training (e.g., fielding drills) on the field. So, if you’re looking to improve defensively, there’s a good chance you’ll be training with your team on the baseball diamond.

You’ve seen or done them at some point in your career. There are hundreds of examples we can give here, like double-play drills, fly ball drills, catcher overthrow drills, ground ball drills, and more.

But there’s a way to make these drills more impactful, and you can enhance them with equipment during field practice.

People often think of baseball as a slow sport because once the action stops, it literally stops. But we know that’s not how it works. Baseball is a game of patience, timing, coordination, and explosiveness. It’s generally an all-or-nothing game as soon as the action starts, so it's highly athletic and requires extreme versatility.

That’s why VertiMax goes so well with baseball training. VertiMax is the most versatile piece of training equipment on the market, and you can use it offensively or defensively. However, in this article, we’ll highlight ways you can add VertiMax to practice and improve your baseball defense.

Fielding a ground ball is about reaction time, coordination, and agility. You need to move fast, get low, and think about the next step as soon as the ball hits your glove. With VertiMax, we can facilitate faster and more explosive approaches to ground balls, as this baseball athlete demonstrates in this Instagram video.

We can also enhance the throwing effect by putting more resistance through the body as an athlete attempts to field and throw the ball. This baseball athlete shows that perfectly.

If you’re a catcher and need to pop off the ground to deliver a high-speed throw to second base to catch a runner, then you need VertiMax. Look at the explosiveness of this athlete from the ready stance to his throw. That leap up and step forward requires speed and power, and VertiMax simply enhances that training effect.

Similarly, we can put a catcher in a more defensive stance (e.g., when trying to stop a wild pitch) and train them that way, as this post of an athlete shows.

Outfielders do more running than most of the in-field because the outfield is so much bigger. Thus, most outfielders are actually pretty darn quick.

You can use VertiMax to train sprint mechanics and speed, as shown on our YouTube channel.

Pitching is easily the most essential defense in baseball, which is why so much money goes toward pitching staff, training, and coaching.

There are many ways you could use VertiMax to improve pitching mechanics, but this is a neat variation worth showcasing.

Watch these pitchers in this post practice stabilizing their back legs and trunk under load as they prepare to throw.

If you need to improve your defense on the field, there’s no better way to do it than with VertiMax. There are hundreds of configurations to help improve groundwork, pitching, catching, fielding, running, and everything in between.

Players can use VertiMax for any specific baseball position training because of the versatility.

Are you interested in more baseball-specific training using VertiMax? Check out these articles. 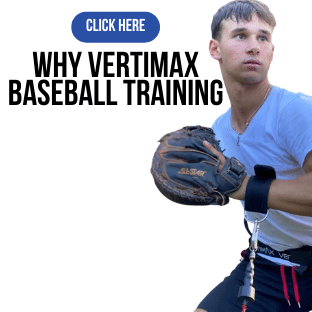