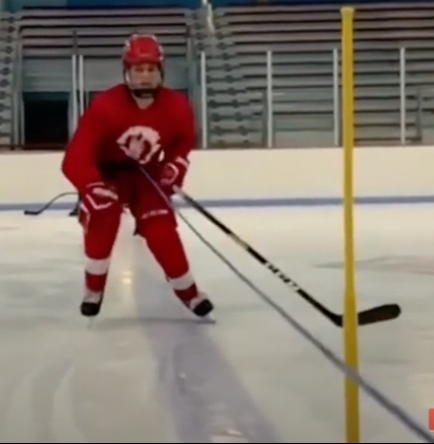 The Stanley Cup Playoffs are underway, and they're as exciting as ever. Hockey has always been one of the most competitive sports around. Many hockey players have enhanced their performance on and off the ice with VertiMax hockey training equipment.

To be dominant on the ice, you need to be strong, fast, and powerful, while enduring long sessions skating.

Your off-season and in-season training tactics also have to be on-point to ensure you're at the peak of your game.

Learn what it takes to compete for a chance at the Stanley Cup by elevating your training experience. Check out this on-ice hockey training using the VertiMax Raptor.

Most hockey training is done off the ice and is often called dryland training. They train during the off-season because the focus shifts more to injury prevention, mobility, speed, strength, and conditioning. So, you'll see more athletes in a gym setting during the off-season than at any other time of year.

Because there are so many variables to work on, programming can either be cookie-cutter or highly specific, depending on the athlete's needs. With the former, the focus is on general physical preparation (GPP). So, you'll see a combination of training modalities used.

For instance, it's not uncommon to see hockey athletes doing most of the following in their off-season programming:

Focus: Improve maximum force output with heavy loads. This is strength-based work, so force is exceptionally high, but velocity (speed) is low.

Focus: Improve force output in a fatigued state. This is hypertrophy-based work, so force and speed are moderate; speed will inevitably decrease as fatigue sets in.

Focus: Improve force output at maximal speeds. This is velocity-based work, so force is lower while velocity is exceptionally high.

Focus: Directly improve skills or techniques as it relates to hockey. You can do these drills on the ice or off.

If an athlete has very particular needs, the focus will eventually shift toward specific physical preparation (SPP). For example, coaches will take a much more nuanced and direct approach if an athlete is overcoming an injury or has severe imbalances in gameplay or movement capacity.

If you're playing hockey professionally on the ice, then that should be your focus. Thus, in-season hockey training should support your efforts to perform at the highest level possible. Your dryland training (in the gym) will probably take the backseat to other things, but you shouldn't scrap it.

Dryland training should aim to maintain your off-season work. Thankfully, this is slightly easier to do than most realize because the minimum effective dose of training is much lower. In other words, you don't need to crush your workouts in-season; you need to do enough to maintain.

Most coaches have their hockey athletes training 1-2 times per week in the gym, focusing on strength maintenance, speed work, agility, and mobility. Max effort/velocity work is still programmed in but not too close to games (e.g., not within 1-2 days of game time).

Lastly, aerobic conditioning takes a backseat, as that is trained heavily during gameplay.

Hockey is a game of strength, speed, power, and endurance. Playing at the highest level means you possess those characteristics and can skate and handle a stick. But often, it's hard to work on all of those things at once. As you've seen, off-season training can be pretty intense and requires a lot of time and dedication.

With VertiMax, we can elevate the training game on and off the ice to help you address any areas that need attention. Because VertiMax is unique and well-crafted, we can address multiple areas simultaneously (e.g., speed and stick work).

Here are some great examples.

Unlike running, skating requires lateral drive to propel forward. Thus, hockey athletes almost always include lateral training in their programming. I can do this for endurance (e.g., lateral shuffles) or power (e.g., lateral hops).

VertiMax allows you to work on both, with just enough resistance to improve endurance or power.

Here's a video of a lateral shuffle using the VertiMax V8 Platform to build lateral endurance:

Here's a video of explosive lateral hops with the VertiMax V8 Platform adding non-varying elastic resistance (true constant tension). Being able to safely and effectively add resistance to plyometrics is a game-changer for hockey athletes.

Skating at top speeds is not dissimilar to sprinting, minus the part we mentioned about lateral drive. There's a coordinated effort from both sides of the body to produce lots of force and resist rotation through the spine. This allows for smooth rhythm and timing and an effortless-looking skate.

We can effortlessly train sprint and skate mechanics through better arm and leg drive using this VertiMax training drill.

Everything about hockey is explosive, from the checks to the all-out sprints down the ice to the slap shops. Explosiveness means power, and nothing says power like squat jumps. Except for maybe VertiMax squat jumps.

Do you want to know what it's like to jump against real resistance that won't snap you back down to the ground like a slingshot? Check out these VertiMax squat jumps drills.

It doesn't matter what part of your season you are in or what you need to work on to become the best and most well-rounded hockey athlete. With VertiMax, you can work on all parts of your game year-round and know that you will progress more than you ever thought possible.

Want to see more explosive VertiMax hockey drills? Check out this hockey-based article that will give you endless ideas about improving your game. 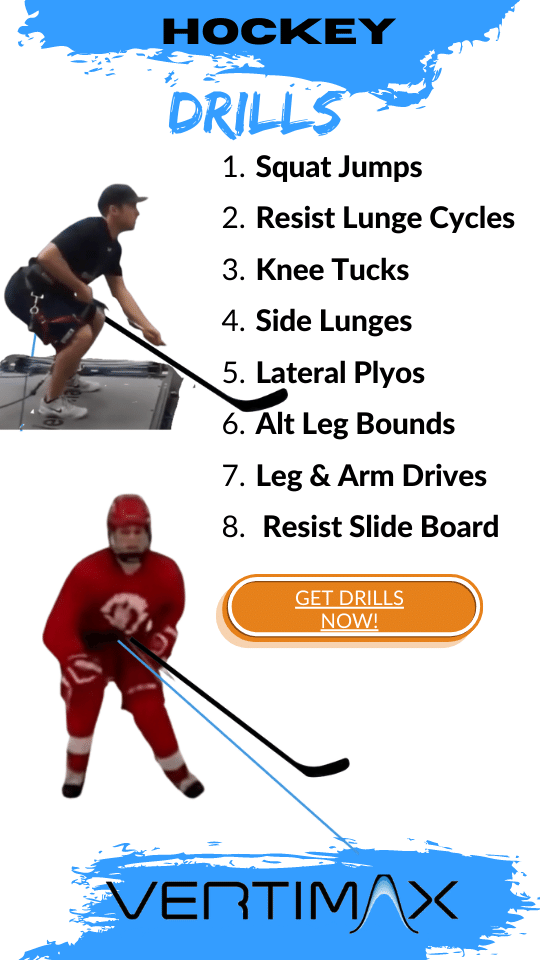