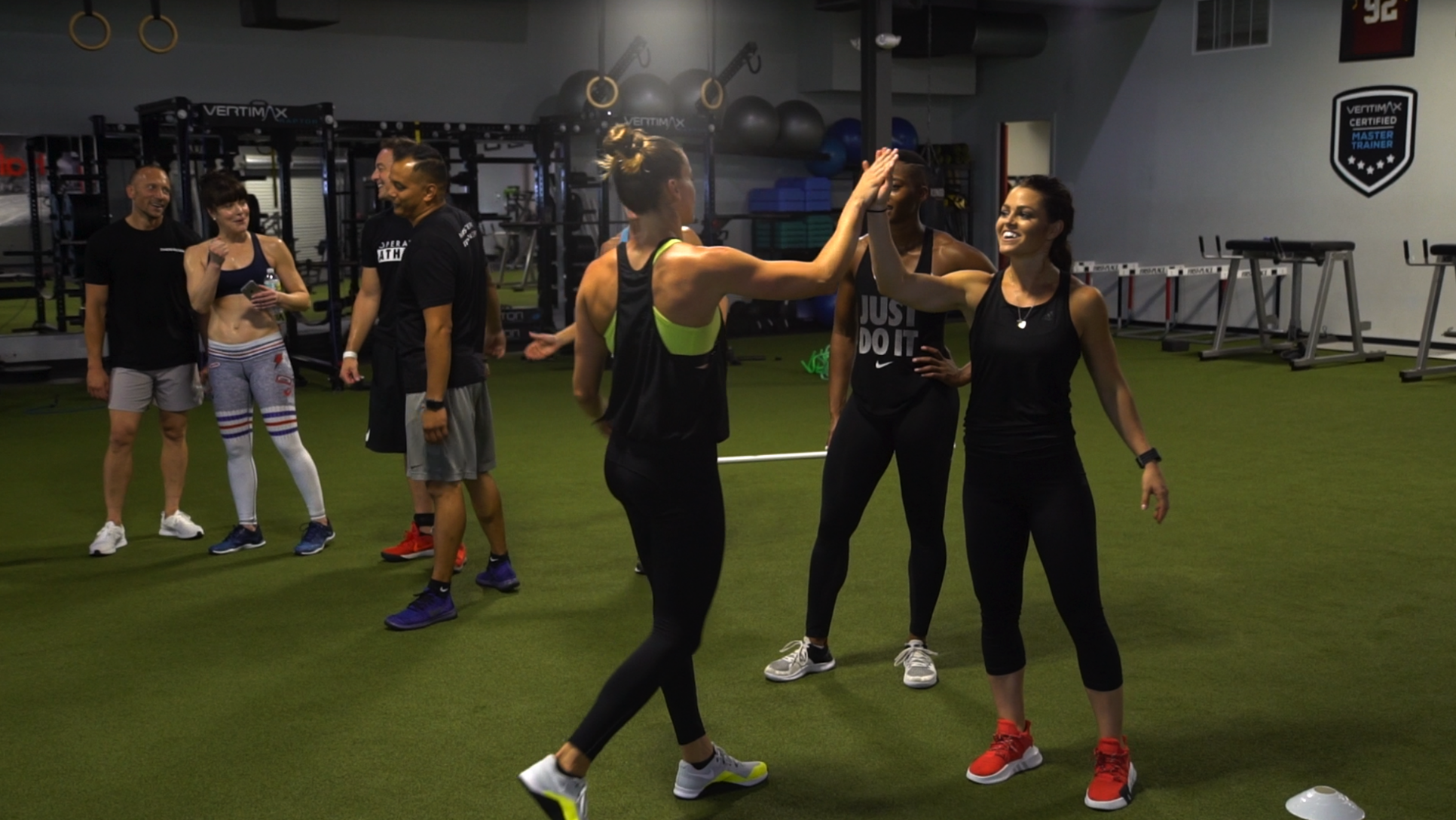 One of the things that sets Vertimax apart from other group training technologies is the fact that it can be easily utilized for team group exercises for any sport. Athletes of all ages and sizes can build strength and skills simultaneously without disturbing each other. While a host of different techniques have been established by the Vertimax team and an army of coaches and fitness experts, we’d like to highlight four group exercises that will help your team step up to the next level.

Ideal for basketball, soccer, and football, the sprint development drill allows two players to utilize the Vertimax side-by-side. Place the Vertimax at the foot of the court (or field), and have the athletes strap in to the hip resistance belts. This configuration allows for several different drills. First, have the athletes sprint up the court (or field) for about 10 meters, touch the ground, then sprint back, and touch the ground right before the Vertimax. That’s right – Vertimax suicides. This drill is a great way to build explosive power, as well as agility, in sports that require intense acceleration.

This drill was developed by the TRUEAP Coach team and is demonstrated in a YouTube video, which you can find here. This drill has five athletes strapped in to the Vertimax at any one time – in other words, your entire ‘A’ team can drill at once. One player stands on the Vertimax with resistance bands loaded at the waist. He (or she) then practice their vertical as a coach tosses a basketball for a one-player tipoff. Meanwhile, one athlete stands at each front corner with the resistance band strapped to their wrist. These two practice a quick first step, bringing the ball over from the Vertimax side to their outside. Finally, two players man the back corners, where they strap in at the ankles. They practice driving up the court in 10 meter stretches. Every 5-6 reps, the athletes change position, and ten minutes later, they’ve got a great workout behind them.

There are plenty of group exercises than come in handy on the diamond. While many might first think of the Vertimax’s potential in terms of driving power – and it certainly does bring a new meaning to batting practice – it’s also a very useful fielding tool. For example, the Vertimax Raptor can be single-band loaded at the waist for three players at the same time. These athletes can then practice fielding lobs and grounders that require them to make quick runs forward and to each side. In doing so, they’ll learn to bring their momentum into each play they make in the game and return the ball to the infield as quickly as possible.

One of the best aspects of the Vertimax is its ability to build good form. The Running in Place exercise is a case in point: it builds quad strength and ankle strength while ensuring that athletes run with their feet striking exactly below their center of gravity, so that a straight line can be drawn from their ankles, to their hips, to their shoulders. This alignment is crucial to protecting knees and the lower back from absorbing shock and facilitates a healthy midfoot strike. The exercise can be undertaken by three athletes simultaneously: one in front of the Vertimax and one on each side. It features a quad load and an ankle load, and should be completed in three 20-second intervals separated by about half a minute of rest time.

These four exercises show that the Vertimax isn’t just a tool for individual athletes seeking to build strength: they can make all the difference in team performance as well.