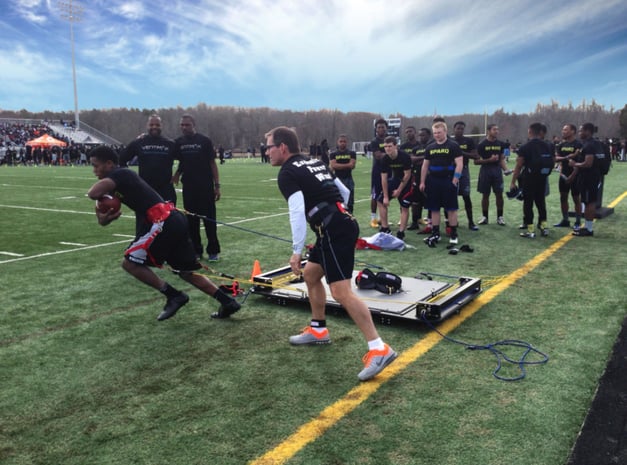 Football is built on explosive power, speed, and agility. It is as demanding as it is intricate. And while most spectators are absorbed by the individual athleticism of star players, no football team training program can get by without the cohesive performance of its front line, or the regular contributions of backs that deliver steady three and four-yard gains. In other words, Football is a true team sport.

Given that football calls on athletes to work together while laying it all on the line, it should be no surprise that the ideal training regimen requires coordination and teamwork. Yet few strength training tools exist that allow players to build individual strength while at the same time working together and increasing morale. The VertiMax is one such tool.  View more VertiMax football training  information on the main Football Training page.

If you’re a coach looking to get the most out of your players this year, consider these 4 football team training drills as a showcase of the VertiMax team-building potential.

The Quick Pass Drill is a favorite because it builds strength and increases skill. When players think of strength training, they often picture themselves sitting in a gym making unnatural movements that target just one or two muscles. This drill is proof that the VertiMax allows athletes to practice their natural movements while building strength. The drill requires two athletes, a QB and receiver, to strap into the VVertiMax Raptor (each athlete should be strapped into his own VertiMax ). The receiver loads resistance at the waist, while the QB loads resistance there  and at the ankle of the throwing foot. Both athletes start at “the line of scrimmage,” and the QB jumps back into a passing position. Meanwhile, the back runs a route, looks up when complete, and catches the ball.

Originally developed with basketball in mind, this drill can be completed by four athletes at a time. Place the Raptor in a field with plenty of room on both sides, and attach a resistance band to each athlete’s waist. The athletes then shuffle sideways for ten meters, touch a cone, and then shuffle back. This drill builds lateral movement and proper form. For an additional workout in this configuration, try having each athlete practice a series of 6 lunges from the start position before walking  back.

There may be no better workout for your backs and receivers. This calls on two athletes to take on resistance at the waist and practice a stop-start. They should crouch in a 4-point sprinting position and focus on exploding forward. The goal of the drill is to reach top speed as soon as possible. It’s a great way to get running backs to employ a little extra power when they get a chance to breakaway.

The back should practice backpedaling with his eye on the ball. After he backpedals about 10 yards, the QB can direct him to sprint laterally, run back towards the line of scrimmage, or take off down the field. Unlike most other drills, this one is infinitely variable, as the QB and Back can decide to run all sorts of patterns, and the QB can surprise the back and make sure that he’s ready to quickly change direction and lunge or jump for the ball.